The new scent will feature notes of almond and vanilla, and will come in a golden shoe. I will update with details as they're available, or you can read more on her blog. (via wwd)

Vanilla and almond are combined in a nostalgic scent. Warm and caressing notes, tempting and indulgent. In the air and on your skin, the smell of goodness.

And the new visual (the bottle shown in the image at top was a prototype; the real bottle is much simpler): 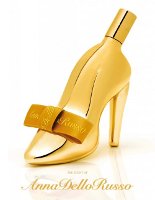 The Scent of Anna Dello Russo is $25 for 8 ml Eau de Toilette and can be found now at Yoox, where they note that the bottle is extremely fragile and "could easily break into sharp fragments". (via yoox)