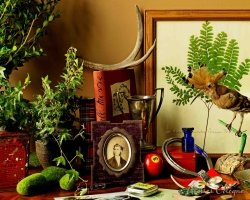 “He had a good feeling about it. That’s the thing about luck, you feel it or you don’t. This moment, he felt it. He found the morning’s rain had left everything looking greener and a bit sharper, like he was seeing it all for the first time, and he headed off with a spring in his step.”

So reads the promotional text for Trèfle Pur Cologne Absolue, one of the five fragrances recently launched by Atelier Cologne. Trèfle Pur was created by perfumer Jérome Epinette (who also developed Bois Blonds and Oolang Infini for Atelier). Its name translates as “pure clover,” and this fragrance does include a heart note of clover absolute. It starts with a very crisp note of basil, and something tart that reminds me of lime, possibly the effect of the bitter orange mixing with the basil leaves. Things get even leafier in the fragrance’s middle phase, where the namesake clover is paired with violet leaf (not violet flowers, mind you: this definitely isn’t a floral fragrance). There’s also a light layer of patchouli; it’s a dry and root-y patchouli, almost vetiver-like, rather than a damp and earthy patchouli. It’s the part of the fragrance that feels the most typically masculine, but it’s not strong enough to dominate the overall composition. Three or four hours later, I’m left with a subtle dry-down of greenish citrus and a whisper of sheer musk. 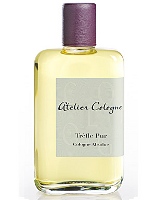 Like its sibling fragrances Grand Néroli and Orange Sanguine, Trèfle Pur is an interesting variation on the traditional “eau de cologne” idea. It has above-average staying power for a citrus-based scent, and it could easily be worn either by a woman or a man. I’ve been sampling it over the past week or so, while my husband and I have been moving house, and it’s turned out to be just right for this cycle of packing and unpacking, opening the windows of our new place to let in the spring air, and making plans for our tiny garden plot. I needed something fresh and invigorating to wear, and I also welcomed Trèfle Pur’s timely evocation of good luck.