Iris is the first new fragrance to join the Donna Karan Collection, which up until now was made up entirely of relaunches from the line's back catalog. The Collection scents are all done up in opaque black glass; the packaging is handsome if rather functional looking (see below) and the bottles have a nice heft. They're in limited distribution, making this a sort of niche-from-mainstream kind of line along the lines of the Chanel Les Exclusifs or the Armani Privés, although the prices are more reasonable than that perhaps implies.

On paper, Donna Karan Iris smells at first mostly of iris — not the rooty, bold, turnips-just-pulled-from-the-earth sort of iris à la Serge Lutens Iris Silver Mist, but the buttery-soft sort of iris that you get in Chanel's 28 La Pausa, albeit without that elusive Chanel touch that makes so many of the Les Exclusifs fragrances smell like money. Later, Iris takes on a more floral character: it's light and spring-like, and smells like a dewy, rosewater-ish blend of pale flowers laid over a very mild iris-y base. On skin (my skin, anyway), the trajectory is nearly reversed. We start with the pale flowers, and there's a faint strain of creamy magnolia that doesn't seem to stand out on paper; after 20 minutes or so it's a very quiet iris, just barely earthy, over a musky base.

Iris has a minimalist feel, and is more transparent than not: you'd be hard-pressed to over apply, and if you're after impressive sillage or lasting power, you're bound to be disappointed. I confess I was rather disappointed at first: it simply isn't as bold, or as focused on the iris, as I expected. On later reflection, I decided they were probably wise to take a different approach. Iris, like oudh, has been trendy the past year or so, and we didn't really need another variation on the same theme.

Verdict: it's pretty, approachable without smelling generic or dull, and very much worth a try. It didn't make me gasp and reach for my wallet, but I have a feeling it will find lots of fans. 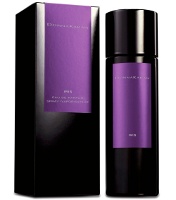 Donna Karan Iris launches this month, in 100 ml Eau de Parfum for $95. The notes are iris, violet, magnolia, rose de mai, vetiver and ambrette seed. In the US, it will be at Bergdorf Goodman and selected Neiman Marcus stores, and at Donna Karan Collection boutiques. In the UK, it will be at Harrods.

Note: top image is p_0349 by tomooka at flickr; some rights reserved.