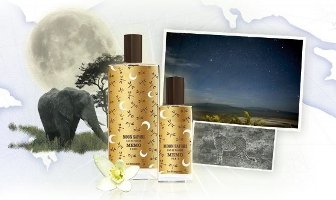 Niche line Memo has launched Moon Safari, a new fragrance under the tag line "the leather side of vetiver":

The dark side of the moon hides a jungle rustling with animals as free as they are wild. They live with their nose in the wind and their head in the stars, in the lightness and sweet pleasure of weightlessness. In the heat of the savannah, they welcome lazybones, men in the moon and dream chasers like old friends. A fanfare of roars, sighs, whinnies and cries ring out to greet each new arrival: no one even thinks of sleeping when it’s time to set off on a Moon Safari.

Another update: Moon Safari is now known as Moon Fever.