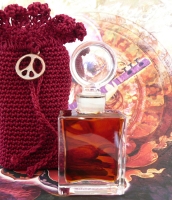 Project Peace on Earth is an annual worldwide telecast concert of Superstar musicians performing Sacred Music from the most mystical concert venues on the planet: Egypt’s Great Pyramids, England’s Stonehenge, Australia’s Ayers Rock, Peru’s Inca Pyramids, Japan’s Mount Fuji, and California’s Mount Shasta. The fragrance has been produced with the concept of the concert in mind, orchestrating the fragrance like a symphony with three complex chords of base, middle and top notes to create a resonant harmony of peace. Each chord contains up to seven different notes. The primary base chord notes include: Vintage Sandalwood, Tobacco, Vanilla Orchid Bean; middle chord notes include: Champa and Blue Lotus; and the primary top chord notes include: Clementine, Ginger and Neroli. Over thirty pure, plant essences combined in organic, food grade, grape and grain alcohol in the liquid perfume extract.

Roxana Illuminated Perfume Peace is available in 7 ml liquid ($190), 1 ml liquid ($30) or solid perfume compact ($70), and can be purchased at the Roxana shop at Etsy. (via press release)

1. The official name of the perfume is actually ☮ (that’s a peace symbol, for those of you who don’t have a browser capable of rendering one).