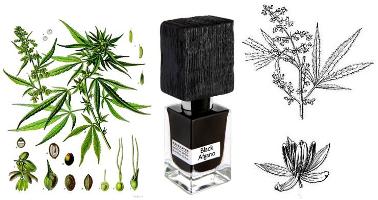 I’ve been known to let people sniff a perfume I’m wearing and tell them an outright lie: “Oh, this? It’s built around a molasses-corn silk note that’s just been developed!” or “The perfumer was trying to re-create a country scene. Imagine a field in early summer: the scents of cows, manure, grass, damp earth, and a near-by forest full of blooming honeysuckle!” I tell these “stories” with a straight face and excitement in my voice and often people believe me: “That’s what it smells like!” they say.

I do believe it’s possible to pull the proverbial wool over the eyes (and noses) of even the most jaded perfume lovers if you wrap vibrant images, an exotic storyline, and “forbidden,” “rare” and “hard-to-import” ingredients around a new fragrance; maybe it’s even EASIER to pull the wool over perfume lovers’ eyes because we often have well-developed imaginations, and we desperately want new perfumes to be BOLD! OUTRAGEOUS! ORIGINAL!

I became excited about Nasomatto Black Afgano as I read news releases about its formulation; judging from the fragrance’s description (“smuggled” ingredients, harsh herbs, marijuana-as-incense) I was expecting something strange and “illicit.” Black Afgano’s dark brown juice is syrupy and the fragrance opens with strong aromas of “dirty” cedar (added cumin?) and musk. There is also a hint of wood-scented cigarette smoke in the opening minutes of the fragrance. Black Afgano’s mid-phase of development comes closest to smelling like marijuana with a dry, herbal-leafy accord  (think cured tobacco) tinged with a sweet ‘sweaty’ note. As the scent dries down, there’s a brief moment of funky-furry musk, then Black Afgano becomes vanillic-amber-y with a touch of patchouli.

The lasting power of Black Afgano is sensational — I could smell it on my skin 24 hours after application — but it has minimal sillage; its stages of development are best observed at close range (nose near skin).

Though Black Afgano was blended to evoke the scent of high-grade marijuana (Cannabis sativa), and many reviewers and commenters on perfume blogs have been excitedly talking about its “weirdness” and its scent of fragrant weed, it does not smell much like marijuana (living, dried or burning) to me (or to a hashish-loving friend I let wear it). Black Afgano is a handsome oriental fragrance for men; it’s a “well-rounded” perfume with no ragged/jagged edges. Black Afgano smells more like the incense people use to cover up their pot use than it does the drug itself.

Nasomatto Black Afgano was created by Alessandro Gualtieri, and it’s available in 30 ml Parfum ($148). For buying information, see the listing for Nasomatto under Perfume Houses.