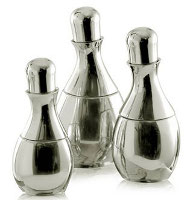 Halston will update their iconic Halston for Women (1975) and Halston Z-14 for Men (1976) fragrances with the new Halston Woman (shown above) and Halston Man. The Halston fragrance license, which has passed hands several times, is currently held by Elizabeth Arden, and the fashion brand is hoping to find new life under recently appointed creative director Marios Schwab.

Halston Woman is a woody floriental developed by perfumer Carlos Benaïm. The notes include bergamot, marigold, black currant, rose, orris, jasmine, patchouli, sandalwood and deep amber. It will be available in 30, 50 and 100 ml Eau de Parfum.

Halston Woman and Halston Man will be packaged in the original Elsa Peretti bottles done up with a platinum finish. (via wwd, additional information via uk.glam)

Update: Halston Woman "incorporates a modern rose floral bouquet to update the original scent with a touch of femininity and patchouli heart to add a layer of sensuous luxury", and Halston Man is a fresh woody aromatic. Both scents will debut at Harrods in London on 7/20. (via press release)