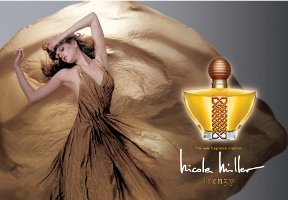 Nicole Miller will launch Frenzy, her debut fragrance for women under new licensing arrangements with Parlux (three prior fragrances under arrangements with Riviera were discontinued, but are now slated to be reintroduced). Miller has noted that...

I don’t like most perfumes. I find them too florally or too old. My clothes don’t age people so I wanted that same kind of fragrance that was young and modern.

Nicole Miller Frenzy will launch in August, and will be available in 50 ($65) and 100 ml ($95) Eau de Parfum and in matching body products. The Frenzy bottle design features a "metal celtic knot design inspired by Miller’s apparel prints".

Update: the Nicole Miller fragrance, now called simply Nicole Miller (no idea what happened to Frenzy), is finally launching at Saks in April 2010.