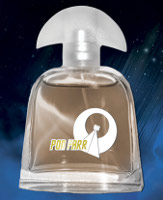 Genki Wear will introduce the first three in a projected series of Star Trek fragrances next month in conjunction with the release of the upcoming Star Trek film.

Pon Farr (shown at right) ~ for women, launching under the tag line "Drive him crazy", and referring to the Vulcan mating cycle.

Because having is not alway so pleasing a thing as wanting. Pon Farr perfume for women is a refreshing fragrance that is both invigorating and dramatic with light, clean notes of citrus, blackcurrant, lotus blossom and water lily. And with base notes from sandalwood, peach and mulberry, Pon Farr is perfect for those bright sunny days and warm summer nights spent together at the beach, around the fire or simply watching your favorite affaire d'honneur. Sharp and aggressive, simple yet exotic.

Tiberius ~ for men, launching under the tag line "Boldly go". Tiberius is a an homage to Captain James "Tiberius" Kirk...

...the most famous and highly decorated starship captain in Starfleet history. Tiberius Cologne for men is a casual yet commanding cologne spiked with freshness and sensuality. Citron, black pepper, and cedar create refreshingly clear top notes, layered over warm vanilla, white musk and sandalwood base notes. Tiberius Cologne for men is difficult to define and impossible to refuse in any universe. Take Tiberius on your next mission and be transported to new worlds of sensual discovery.

Red Shirt ~ also for men; the tag line is "Because tomorrow may never come". Red Shirt is...

...for the young, modern man of the galaxy who doesn't hesitate; who revels in being alive today. Red Shirt Cologne instills confidence, showing the universe your strength, your valor, your devotion to living each day as though it could be your last. Bright, clean and direct with top notes of green mandarin, bergamot and a hint of lavender, Red Shirt finishes strong with base notes of leather and grey musk. It's a daring men's fragrance for those brave enough to place no trust in tomorrow. 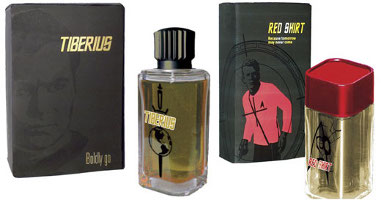