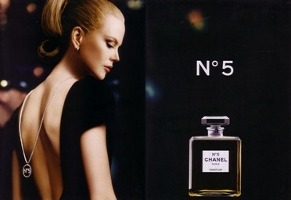 We were in a rambling antiques mall in Billings, Montana, and all around us were the remains of other people's lives — the Spode soup bowls, ratty mink stoles, worn cowboy boots, and stacks of old issues of Look magazine that people thought were worth keeping until they died or were too lazy to throw out. Once I was able to rip my attention away from a 1940s plaster lamp of a Southern belle with a light bulb under her skirt, I saw a battered box with the unmistakable Chanel logo on a nearby shelf. Inside was a two-thirds-full bottle of Chanel No. 5 Eau de Cologne that looked like it was at least fifty years old.

I forgot about the No. 5 cologne until last night when I was looking for something to wear while I watched The Earrings of Madame De..., a decidedly 1950s movie about pawned jewelry and forbidden love in the 19th century. The No. 5 seemed perfect. It is modern and retro at the same time, and something about its old vermouth and jasmine scent seemed to match the spirit of Danielle Darrieux as the movie's lovelorn comtesse.

I got to wondering about who had first owned the bottle of No. 5. Whoever it was had cared enough about it to wear it since at least an ounce had been used, and she stored it in its original box. Plus, she'd kept the bottle for a long, long time. Maybe it was a cherished gift, possibly from someone who didn't have a lot of money since it's an Eau de Cologne. Someone — an old beau or an uncle who went to New York, maybe — asked her what he could bring her and she thought right away of Chanel No. 5, even though she didn't use much scent except rose water. Maybe she didn't even like No. 5 if she thought about it, but No. 5 wasn't about liking it, it was about something luxurious to be doled out in drops for special occasions. When she died decades later her estate scattered to relatives and strangers. The No. 5 found its way to an antiques mall, and eight dollars later it was mine.

To me, that's a sad story. Yes, it's wonderful to go to the closet and gaze at a special bottle of perfume. That's one kind of pleasure. But a greater pleasure comes not from having the cake but from eating it and trusting that eventually another cake will be on its way — or, if not, what the hell it was a tasty cake.

What if the first owner of my No. 5 cologne had worn it every night when she took off her housedress to sit down for dinner? What if she had sprinkled a few drops on her slips when she put them away after washing? Every time she caught a whiff of the scent she would have been reminded that she was worth it, that we only live once, and that beauty is for drinking down. In the end, part of the bottle was wasted to her anyway.

So here's my new manifesto: Let's not keep perfume or other beautiful things as amulets, let's transform ourselves by enjoying them to the fullest. Let's wear the fancy underwear even when no one else will see it. Let's use up that truffle oil before it goes bad — I bet it would be terrific on tater tots. Let's not wait for company to light candles at dinner and drink from the delicate Murano wine glasses. What the heck, let's let the dog get up on the new couch. You only live once. The Osmothèque can be responsible for keeping stashes of vintage No. 5 Eau de Cologne. Me, I'm wearing it.