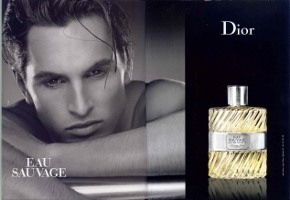 Today's poll was inspired by a post of Marina's at Perfume Smellin' Things, titled simply In Which I Finally "Get" Shalimar.

The poll question: name a perfume that you disliked on the first try, loved on a later try.

How many tries did it take? I'd also love to hear how you decide what will get another chance. I used to try (almost) everything 3 or more times before I gave up, but there are too many releases now — I give up much sooner than I used to.

Mine: Diptyque Philosykos and Frederic Malle Une Rose, among many others.

Note: image shows a new ad for Christian Dior Eau Sauvage, and has nothing to do with anything. Found at the forums at Images de Parfums.