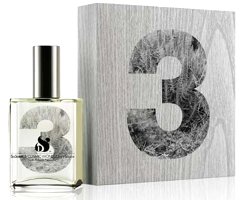 The Six Scents Fragrance Initiative debuted last year. The project is a collaboration between Symrise, Metaproject and Seven New York: each year, they'll release six new fragrances, each one pairing a Symrise perfumer with a designer, and donate a portion of the proceeds to charity. The beneficiary of the 2008 collection will be Designers Against AIDS.

Several of the fragrances in the 2008 collection were interesting (I'm still mulling over No. 2, Wicken 3000 oops, make that No. 4, Diagonal) but No. 3, The Spirit of Wood was the only one that inspired love at first sniff. No. 3 was developed by perfumer Philippe Paparella-Paris for Cosmic Wonder Light Source, the fashion line of Japanese designer Yukinori Maeda, and it's worth repeating the perfumer's statement from the ad copy:

The inspiration for this fragrance comes from Cosmic Wonder Light Source’s nature oriented fashion collection. Inspired by the designers memory of a scent experienced during a walk through an eucalyptus forest, a selection of fresh green top notes were combined with fig leaves and enlightened by green grass playing with fresh cut cypress. The idea was to create a rough and natural fragrance, using a lot of essential oils with a focus on the woody notes such as vetiver and hinoki.

That gives a pretty good idea of what to expect; this is a green vetiver-woods fragrance, very outdoorsy, more fresh than deep in the opening, earthier and woodier as it dries down (notes, other than those mentioned above, include elemi, coriander, cedar and white amber). The fig is subtle but lends some roundness to the early stages. Do think "forest" instead of "hunk of wood" — it isn't as raw or woody as say, Monocle + Comme des Garçons Scent One: Hinoki, but it's woodier and less summery than many of my green favorites such as Miller et Bertaux's No. 3 (Green, green, green and green). Whether or not you'll find it "rough" probably depends on where you're coming from — I find it more smooth than not. Very wearable, and I'd like to have a bottle.

Six Scents: Series One, No. 3 The Spirit of Wood is a limited edition (2000 numbered bottles) and is available in 50 ml Eau de Toilette for $85. For buying information, see the listing for Six Scents under Perfume Houses.