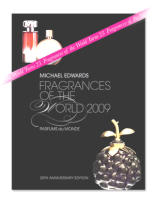 Author Michael Edwards will release the 2009 edition of his yearly Fragrances of the World, known as "the fragrance bible", in January. The guidebook celebrates its 25th anniversary in 2009.

The new edition lists over 6500 fragrances (around 800 more than the 2008 edition) classified by fragrance family. It is used by numerous retailers to help customers find fragrances they might like based on the scent(s) they already know and enjoy.

Fragrances of the World 2009 can be ordered directly from fragrancesoftheworld and is $185; if you order before December 15, you get a 10% discount. (found via moodiereport)