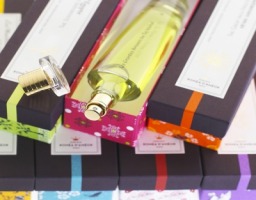 Roméa d'Améor is a new French niche house that debuted earlier this year with seven perfumes created as tributes "to real women throughout the ages who have touched history in tangible ways". All of the fragrances were developed by perfumer Pierre Bourdon.

Les Grandes Amours du Taj-Mahal / The Taj Mahal's Eternal Love ~ "The year is 1610 and Emperor Shah Jahan is in love with his wife, his kingdom and the gardens of his residence, in that order. The lush beauty of the garden rivals Eden with its fruits (grapefruit, bergamot, melon) and flowers (lily of the valley, rose and jasmine)…even the water that flows from the garden itself is legendary and scented with the wild beauty of nature (lotus) and the soothing clean of water notes..." Additional notes include black currant, green notes, sea water, iris, vetiver, raspberry, peach, vanilla and musk.

Les Grandes Pretresses Incas / The Grand Inca Priestesses ~ "...Machu Picchu, May of 1462. The harvest is complete and the King calls a celebration day to be led by a priestess. While the shaman priests usually officiate at the grand ceremony, the King points out that the year will be ruled by the Moon, the feminine half of the masculine Sun. But who to choose? Who can create the bond between the Inca gods and his kingdom? He decides to select a priestess by her very fragrance..." The notes feature mandarin orange, grapefruit, orange, red apple, mango, orchid, sea water, lily of the valley, jasmine, sandalwood, oakmoss, teak wood, nectarine, dark chocolate, caramel and musk.

Les Impératrices Japonaises / The Great Empresses of Japan (shown at right) ~ "...Suiko (reigned: 593-628), the daughter of the Emperor, is entering her second year as the first woman to rule Japan. As she gazes out on magnificent garden on the palace grounds, she is besotted with the tender white floral notes (peony, lily, ylang-ylang, heliotrope) scenting the wind. Another breeze brings the soft and powdery notes of iris and violet..." Also has notes of freesia, melon, violet, rose, lily-of-the-valley, orris root, vetiver, teak wood, sandalwood and tonka bean.

Les Maitresses de Louis XIV / The Mistresses of Louis XIV ~ "The scent story of The Mistresses of Louis XIV begins in 1668 in the grand park of the Palace of Versailles. The King desires a woman who possesses both the earthy and wild majesty of the garden (lily, rose, and green notes) and the opulent splendor of the castle (wood, amber, cloves and galbanum)..." Additional notes include black currant, melon, glory lily, jasmine, narcissus, lily of the valley, iris, nectarine and musk.

Les Souveraines d'Egypte / The Sovereigns of Egypt ~ "The year is 1346 and Egypt’s XVIII Dynasty is thriving. Nefertiti rules by the side of her Pharoah and husband Amenhotep IV (Akhenaten)...More than the breadbasket of Egypt, the Nile nourishes fragrant flowers and fruit, some that can be found nowhere else. Nefertiti recognizes the magical scent on the wind and immediate commissions a perfume that encompasses all its beauty to serve as an ambassador across borders… something sweet (melon, passionfruit) yet very creamy (lychee, balsam of Peru, vanilla) and with a dash of freshly ground spice (clove)…like a Middle Eastern desert served with rose water." Additional notes include orchid, jasmine, magnolia, rose, heliotrope, vetiver, iris, coconut, peach, amber and musk.

The Roméa d'Améor fragrances are available now at Luckyscent, in 100 ml Eau de Parfum; $135 each. (via luckyscent, additional information can be found at dameor.fr)