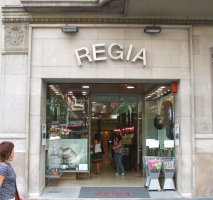 The poshest shopping street in Barcelona is the swanky Passeig de Gràcia, awash with Gaudi masterpieces and designer boutiques. In fact, you might be so busy goggling at the buildings and the sidewalk tiles (see below), you’ll walk straight past Regia, the city’s best niche perfumery.

Regia is both a perfume shop and the entrance to the Museum of Perfume — actually, a museum dedicated to perfume bottles. Entrance cost to the Museum is €5, rather than free as the guidebooks suggest, so you should be aware that your cash won’t get you access to sniffs of rare Chanels or anything…just a look at the bottles.

Regia packs as much as it can into its long space — products that elsewhere might be showcased are often tucked into the edge of shelves. Keep your eyes open.

Metro: Catalunya or Passeig de Gràcia. The shop is on the left as you walk up from Catalunya.

Nearby: Regia is next door to one of Gaudi’s amazing houses — the Casa Batlló. You can tour this house (entrance fee) and get out onto the roof; the house is designed round a George and the Dragon theme, and the roof makes up the scaly coils of the dragon. Further on, and across the Passeig de Gràcia, is La Pedrera, the even wackier apartment building created by Gaudi, with an undulating roof and ironwork seaweed foaming the balconies.

Don’t miss: …what’s under your feet! The sidewalk tiles here are six sided, and are copied from a Gaudi design for one of Casa Batlló's bathrooms. Each tile shows sea creatures. The tiles fill the whole length of the street, and it’s amusing to spot the places where the tile layers made a mistake (despite the fact that the tiles are all identical — it’s just a question of turning them till they fit). 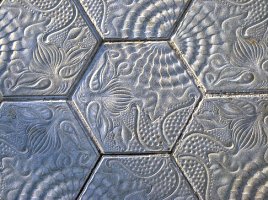