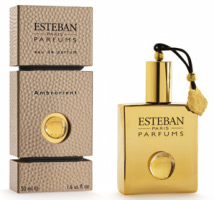 Esteban has launched a new collection, Les Orientaux, made up of three fragrances:

Orientalissime ~ "With airy softness, the precious woods pierce the sky with their slender tops. The diaphanous halo of wispy whorls encircle these graceful peaks."

BoHo ~ "Boho - a scent, just as distinctive and complex as the underlying style of Boho chic. [...] Martinez describes BoHo as a 'patchouli, coconut, floral, salinic scent' - and as such BoHo presents itself: In the prelude coconut and flowers of some exotic nature, dominate and is complemented by a slowly developing salty note with a certain depth lent by patchouli."

Les Fauves ~ "Namesake and inspiration for this fragrance are the Les Fauves - the originally the pejorative term of "wild animals" which referred to an individualistic artistic movement at the beginning of the 20th Century in France that revolutionized, the established concept of colour and functioned as a kind of forerunner for Expressionism. [...] ...described as an 'animalic, spicy amber scent': A herbal kick with slightly bitter trends, coupled with a rich pepper note that doesn’t lack in sharpness, which progresses to a ambery leather note - dark, but with a spicy-hot sweetness."

Silver Lining ~ "...described by its creator as an "Anisic and iris scent", equals a fine, gentle lucid brush stroke, casually dabbed, created with lightness but still dominated by a certain unpretentiousness. Silver Lining, used in English as an idiom, is a thoroughly positive scent that conveys more feeling than perfume usually does: Soft anise and a creamy iris interpretation merge into a languorous scent that flatters the wearers skin and wraps it in a delicate veil."