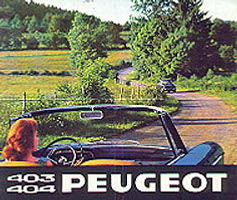 A few weeks ago I was on the back deck of my father's house in Montana, tapping out a review of Dana Tabu on my laptop when my father leaned up against the deck's handrail. He still wore tall rubber boots from mucking out the horses' stalls and he held leather work gloves in one hand. "So, you're writing something about perfume?" he said.

My father used Old Spice soap on a rope, and although he didn't know it, his Oil of Olay sunscreen smelled like roses, but otherwise perfume was a foreign concept to him. When I told him that, yes, I tried to write something every week about perfume, he said, "Have I ever told you about that Peugeot I used to have?"

I was surprised. My dad has always driven big, usually old, pickup trucks. Right now he has an early '90s diesel Chevy. "Well," my father said, "In the early '60s, mom and dad drove me and Gerry" — Gerry is my uncle — "to San Francisco to pick up a couple of used cars. Gerry got a German car, and I got a Peugeot. That was a great little car — got 28 miles to the gallon. Never broke down. A French lady had owned it, and she'd spilled a bottle of perfume in the glove compartment. For five years, whenever I opened the glove compartment it sure smelled good."

My father had a happy, faraway look. For him, perfume symbolized youth and a time full of possibility. (When I asked him what happened to the Peugeot, he said that Gerry had wrecked his own car by running into a cow. "Completely totaled it. The cow was pregnant, too, so the insurance company had to pay out for two cows." Gerry then borrowed my father's Peugeot, and when he bent down for a second while driving, he swerved and took out a row of mailboxes. Then began the string of pickup trucks.)

On the other hand, when an activist friend found out that I like perfume, she said, "'Perfume is bondage!' That's what we used to say." For her, at least at one time, probably during Janis Joplin’s heyday, perfume was something that women wore to attract men, so it symbolized dependence. (Considering some of the skanky vintage Miss Dior and hyper-mossy Parfumerie Generale Corps et Ames I wear these days, perfume in my case could mean independence from people altogether.)

Both of these stories made me think about what perfume — not individual fragrances, but perfume as a whole — means to me. I'm still working it out, but for me perfume is about glamour, art, comfort, beauty, and luxury. It's about the pleasure of holding a beautiful bottle, and the ritual of dabbing the stopper on my wrists and neck.

More precisely, it's about defining myself each time that I reach for that bottle of Caron Farnesiana or Ormonde Jayne Ormonde Woman or Guerlain Nahéma. Perfume, then, is how I tell myself what I am, or want to be.