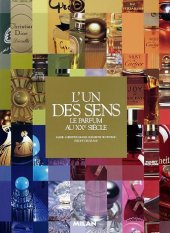 L'un des sens — a French wordplay on the term indecency — was originally the title of a magazine on olfaction and perfumery, edited by Sylvie de Chirée and Brigitt Hörlin, and published somewhere in the late '80s. I don't know whatever became of that magazine, but the clever title was re-used in 2001 by Marie-Christine Grasse, Elisabeth de Feydeau, and Freddy Ghozland for their book on 20th century perfumes. L'un des sens (2001) is perhaps best described as a 'hardcopy' slideshow: it's a lavishly illustrated, chronological compilation of perfumes launched between 1900 and 2000, from Houbigant's Parfum Idéal to Flowers by Kenzo.

A tribute to the beauty of modern perfumery, then. So is this just another coffee-table book? No, it's more than that. L'un des sens is different from the titles we've discussed so far, in that it also celebrates the great women of the past century. After all, the authors argue, perfume has been associated with femininity for the largest part of the 20th century; and indeed, the growing use of perfume is in many ways related to the liberation of women from old social restraints (think of the Victorian era, for example). 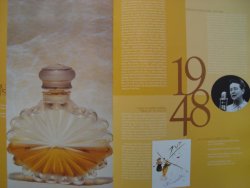 Each perfume in this book is placed in its own time frame, and paired with a woman who made her mark in 20th century society. The page corresponding to the year 1948 (see picture at right), for instance, features Nina Ricci's L'Air du Temps and a biography on Simone de Beauvoir; Chanel's Bois des Îles, launched in 1926, is tied to Josephine Baker; while for the year 1955, there's a paragraph on actress Anna Magnani alongside Balenciaga's Quadrille. There's no deeper connection between the chosen person and the fragrance, other than the historical coincidence that brought them together on that page; but the end result — a selected overview of perfume and femininity in the 20th century — is a wonderful thing to explore.

Each page also features a brief section on other developments in perfumery: the page dedicated to Joy (1929), for instance, has a short piece on Guerlain's Liù, and you can read about Balmain's Jolie Madame on the page dedicated to Lauder's Youth Dew (1953). Surprisingly, not all fragrances in this "tribute to women" are feminine: there are features on Caron's Pour un Homme (1934), Victor's Acqua di Selva (1949), and Guerlain's Habit Rouge (1965), to name a few. The early decades are my favorite part of the book: reading about Victor Vaissier's Violette (1902), then Royal Emilia by Parfumerie Emilia (1903) and Coty's Rose Jacqueminot (1904) is like travelling through time. To fully appreciate L'un des sens, some basic French skills are obviously required; but I'm sure that for many people, the sole experience of browsing through it is rewarding enough. And there's nothing indecent about that.