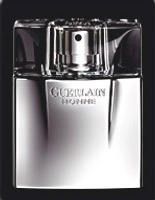 Guerlain will launch Guerlain Homme, a new fragrance for men developed by perfumer Thierry Wasser (who was recently appointed in-house perfumer at Guerlain), this coming August:

The concept plays on the theme of man’s dual nature: human and animal.

The fragrance is firmly rooted in fresh olfactive territory, which according to Guerlain holds “great potential” for the men’s market...the scent features a mojito accord with lime and mint, a fresh floral accord with bergamot and a green woody accord with cedar and vetiver.

Guerlain Homme will be available in 30 and 80 ml Eau de Parfum. (via cosmeticnews) Update: additional notes for Guerlain Homme include rhubarb, rum, sugar, geranium and green tea. (via vogue.fr)

Another update: see a review of Guerlain Homme.