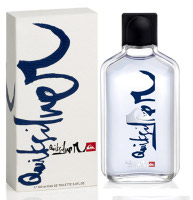 Surf apparel and lifestyle brand Quiksilver will launch its debut fragrance for men, called simply Quiksilver, this coming July (their subsidiary for women, Roxy, has already launched Roxy and Roxy Love for women).

Quiksilver for Men is described as a woody aromatic marine fragrance. It was developed by perfumers Antoine Lie and Antoine Maisondieu.

In a nod to the brand’s Australian origins, the scent features certified organic, fair-trade sandalwood oil sourced from an Aboriginal community, a first for a fragrance, the brand says.

In addition to the sandalwood, Quiksilver features citrus and spices. I'll post a more detailed list of notes when I can find them.

Quiksilver for Men will be available in 30, 50 and 100 ml Eau de Toilette and in matching grooming products. (quote via cosmeticnews, additional information via fashionmag.fr) Update: the notes for Quiksilver include grapefruit, bitter orange, eucalyptus, thyme, musk and sea spray accord. It has already launched in some markets but is not due to reach the US until spring 2009. (via wwd) 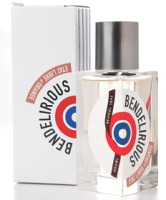 Bendelirious was developed by perfumer Antoine Lie; the notes include iris, leather, cherry lollipop, violet, pink peppercorn and champagne accord.

Other recent launches from Etat Libre d'Orange: Tom of Finland.