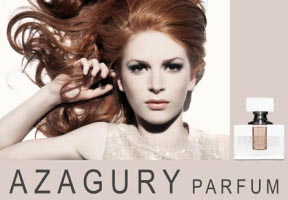 In creating the fragrance, he has infused grand scents of the Twenties and Thirties with futuristic, contemporary materials. Designed for the modern woman, his first signature fragrance is fresh and feminine, with notes of Himalayan Mogra, Helianol, Amber and Mysore sandlewood [sic], inspired by the notion that fragrance creates a state of mind.

The Azagury fragrance was also inspired by "by some very strong cedar notes" that Azagury smelled on vacation at the Villa Maroc in Essaouira, Morocco.

Azagury by Jacques Azagury is available in 4 ml Pure Oil, 7 ml Parfum or 50 ml Eau de Parfum. It can be found at Selfridges in the UK. (first quote via via vogue.co.uk, second quote via independent.co.uk, additional information via selfridges, jacquesazagury)