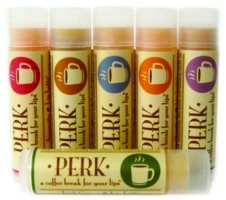 As I write this review, I am drinking a cup of coffee. It’s not an unusual circumstance for me, and I suspect that more than a few of you might be joining me in this ritual as you read. If so, you might share my interest in Perk Lip Lattes. Each of these lip balms, made by a small Brooklyn-based company called Crazy Rumors, is labeled as “a coffee break for your lips.”

So far, I’ve tried two of the six blends of Lip Latte: Coffee Bean and Mocha. Smelling the Coffee Bean balm, I felt as though I had just entered one of those little shops that roast and grind their own coffee, where you can order beans by the pound or just a freshly-brewed cup to go. The Mocha flavor is a sweeter mix. Rather than chocolate, to my nose it had a caramel tinge that made me think of Coffee Nips candies; however, my husband happened to give me a kiss while I was wearing the Mocha blend and he told me that I tasted like maple syrup. In any case, it’s a treat for gourmand fragrance lovers. Now I’m curious about the Hazelnut and Irish Coffee flavors, too.

Even if I weren’t attracted to all things coffee-scented and coffee-flavored, I would want to use these balms for their ingredients and their results. Lip Lattes are all natural and vegan: in addition to their flavoring, they contain jojoba oil, shea butter, olive oil, and an assortment of other natural waxes, plus Vitamin E. This formula has what I think of as the “aahhh” factor: it feels soothing and nourishing as soon as it’s applied (not unlike that first sip of coffee, if you’re as dependent on it as I am). The balm has the texture of a creamy solid lotion, rather than a hard wax or slippery goo, and it gives moisture without a sticky or greasy feeling. I’ve been wearing my Lip Lattes under lipstick, but they also give a slight shine on their own (and the scent and flavor stay for a nice long time).

Last but not least, I’ll note that Lip Latte’s price is a fraction of what you’ll pay for lip balms produced by some upscale natural beauty companies, but this product is just as effective and enjoyable to use. Crazy Rumors also offers a range of Brew Tea Balms, whose lighter flavors (Ginger Peach! Plum Apricot!) will tempt me when the weather gets hotter.

Perk Lip Lattes sell for $4 each; for purchasing information, see the “Store Locator” section of the Crazy Rumors website.

Update: we've changed the photo to reflect the newer packaging for the Perk Lip Lattes.