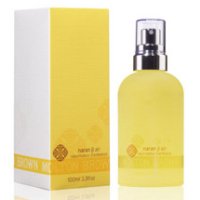 Molton Brown is a line of products I'm not terribly familiar with, although my sense is that they are generally quite good, if not outrageously wonderful. I occasionally come across them in the bathrooms of upscale hotels, or when I sneak into a business class bathroom on an overseas flight. I love the English look and feel about them, a sort of steady and reassuring quality, unflappable with a stiff upper lip.

Several years ago I came across their Naran Ji Liquid Hand Wash and Soothing Hand Lotion in the ladies room in the lobby of the Peninsula hotel in New York. I used it with great interest and enjoyment, and my lingering recollection is an experience of quite tenacious orange blossom that softly cocooned my hands in a subtle silken luxury. When I received a sample of Naran Ji Air (their room spray), I expected it to be a variation on the same theme, but in fact the only common theme between the hand wash, lotion, and air spray is some version of orange. Only the lotion contains neroli. According to their website, Naran Ji Air contains orange, Egyptian basil, Russian carvi, thyme and black currant. In case anyone is wondering — as I was — what Russian carvi is, carum carvi is caraway, but Russian caraway usually refers to the seeds of the nigella sativa plant, also known as "black cumin" or "black caraway".

The first impression after spraying it was heavily reminiscent of Eau de Cologne. In fact, both the Eau Fraiche and the Eau Forte of the Eaux de Caron unexpectedly came to mind — probably the combination of citrus and sharp basil of the Fraiche, as well as the rounder orange and black currant of the Forte. But Naran Ji Air offers only a nod in that direction — overall it is a much lighter, airier, and more pungently herbaceous scent. The citrus and herbal accords are prominent in the opening, and recede only slightly to share the stage with a rather spicy note which I could not identify (probably the Russian carvi), followed by a sweet fruity note that reminded me of holiday scented candles. I imagine the fruit to be the black currant, but it lacks the lush purple black tart and depth of the real fruit, offering instead a more generic 'winter berry' scent.

When I returned to the room 10 minutes later, the fruit met me outside in the hallway but when I opened the door I found only citrus and herbs. After another 15 minutes had passed, I stepped in the room to unexpectedly encounter a light but very smoky, almost leathery note, something I had not anticipated from the initial evolution.

Overall, I found Naran Ji to be pleasant enough and mostly unisex, although the smoky arrival at the end made it just a bit too masculine for my own taste. I can imagine it working quite well in corporate settings (insofar as they allow scent), or even in the restrooms at restaurants and bars, where its zest would be refreshing. It could make a fabulous house warming gift for someone who likes Molton Brown, especially if you combine it with the other Naran Ji products, but overall it didn't create enough ambience to tempt me for home use, and like other Molton Brown home products, this one is not cheap. At $37 for 100 ml, you would probably find me sneaking over to the Diptyque counter instead, to indulge in one of their fabulous sprays for the same price.

For buying information, see the listing for Molton Brown under Perfume Houses.