Escada has launched Moon Sparkle, their yearly limited edition fashion fragrance, and as they did last year, they are including a version for men.

Escada Moon Sparkle fragrances for women and men are available in 50 and 100 ml Eau de Toilette and in matching body products, and can be found at nordstrom. 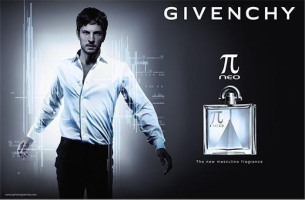 Coming next fall from Givenchy, Pi Neo, a new fragrance for men inspired by the movie The Matrix:

Givenchy Pi Neo is a woody fragrance with notes of mandarin, bergamot, myrtle, cedarwood and patchouli. (via cosmeticnews)

Update: Givenchy Pi Neo will launch in September or October, and was named for the Keanu Reeves character in The Matrix. (via moodiereport)

Another update: here is the description of the scent from Women's Wear Daily...

Concocted by Givaudan’s Antoine Lie, Pi Neo has top notes of Italian bergamot and mandarin orange, a heart of cedar and patchouli and a base of amber and vanilla. As well, each of the accords includes a patented, futuristic note. The top note carries Toscanol, an anise-like ingredient intended to give the fragrance energy. In the heart, Safraleine is intended to enrich the woody accord and to add hints of leather, spice and tobacco. The base of the fragrance has Cosmone, which lends a fluidity and hint of ambergris to the scent.

Givenchy Pi Neo will be available in 50 and 100 ml Eau de Toilette.