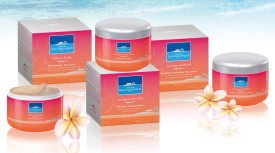 Once in a while, a certain ingredient attains sudden, widespread popularity, appearing in so many products that it seems to go from obscure to ubiquitous in a matter of minutes. The common ingredient in Comptoir Sud Pacifique’s Soins de Plaisir line of scented body products is tiaré, the fragrant Tahitian gardenia (“gardenia tahitensis”). More specifically, the three products in the line all include monoï, a liquid produced by tiaré flowers slowly macerated in coconut oil.

Tiaré is traditionally woven into floral garlands and crowns, and as a single bud worn behind the ear it declares the wearer’s romantic status (single if it appears behind the right ear, and attached if it is worn on the left). Monoï has been used as a beauty aid by women in the South Pacific for centuries, to soften and nourish the hair and skin. Even recently, both tiaré and monoi were still unfamiliar to North American or European consumers, but companies ranging from Christian Dior to Bath and Body Works, Yves Rocher, and The Body Shop have all launched monoï-themed products within the past year. Comptoir Sud Pacifique’s Soins de Plaisir may be the most sophisticated collection of the batch, which seems appropriate, since the company has been evoking fantasies of private beaches and breezy sea voyages since its inception.

Tiaré, like the more common varieties of gardenia, has a creaminess that suggests the smooth texture of the flower’s white petals. However, it also smells milkier, closer to a vanilla note, with a very soft musk base. The fragrance of the tiaré blossom permeates all three Soins de Plaisir products to varying degrees. Voile de Sable Gentle Exfoliant is the least scented. It is an effective but gentle body scrub, containing granules of black sand and sea salt, as well as protective mango butter and passionfruit oil. True to its name, it does feel like very fine sand washing over the skin in the wake of an ocean wave. After using it, I caught myself touching the backs of my arms periodically just to check their smoothness.

The Langeur des Iles Generous Cream is more richly perfumed, with extracts of vanilla and jasmine enhancing the velvety tiaré and additional “lagoon notes” giving the fragrance a marine airiness. As a lotion it is moderately moisturizing, but what it lacks in deep hydration, it makes up for in sparkle. I had missed the fine print that promised “discreet radiance,” and I was surprised to see traces of white iridescent particles on my skin. They wore off soon enough, although the fragrance remained.

The Caresse de Soleil Pearly Oil Balm may be the most innovative formula in the Soins de Plaisir line: it looks like a sheer lotion, but at a touch, it melts into intensely scented oil. It shines in a moist glaze on the skin until it absorbs, and then it leaves a delicate constellation of shimmer wherever it has been spread. It would look more dramatic on tanned skin, but even on my own pale arms, it created a subtle, moonlit effect. (I think this product is more like a caress of the moon than a caress of the sun, but that opinion may reflect my own inclination to avoid strong sunlight.) Its fragrance is the same blend as that of the Generous Cream, but stronger and longer lasting.

The Soins de Plaisir body products would complement many of Comptoir Sud Pacifique’s tropical fragrance blends, such as the floral Aloha Tiaré or the fruity gourmand Vanille Abricot. The perfumed Pearly Oil Balm, and perhaps the Generous Cream, could also stand alone in hot, humid weather. All three items cost more than the monoï-based products sold by the other companies that I mentioned at the start of this review. However, they still offer a more accessible and affordable alternative to a South Pacific island cruise or a Gauguin painting of women wearing tiaré flowers in their hair.