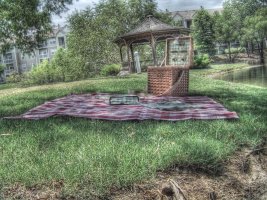 At last, the weather is starting to warm up. Now I can open my office window to fill the house with air scented by honeysuckle, lilies, and roses from the garden. It won’t be long before I start scheming dinners to take down to the river as the sun sets. Of course I wonder, what perfume should I wear for a picnic?

I turned to Teresa Mitchell, founder and Creative Director of Beautyhabit, for a few suggestions. It turns out that she’s a big fan of picnics and had suggestions for both spring and fall picnics. For a spring picnic she suggested Ineke Balmy Days and Sundays, Potter & Moore Bergamot & Green Ginger, and Parfum d’Empire Eau Suave. Balmy Days and Sundays she chose because “the name says it all!”, and, wearing it, I have to agree. It’s a warm floral that smells like a hot afternoon as storm clouds gather over an urban flower garden. Bergamot & Green Ginger is crisper and more tart. Teresa describes it simply as “herbs, freshness, citrus — natural and light”. I swear I smell lily in it, too. Eau Suave is more of a classic cologne and purports to smell like Empress Josephine's imperial greenhouses. My grandpa used to have a greenhouse beside his trailer where, beer and cigarette in hand, he tended orchids. It sure didn’t smell like Eau Suave in there. To me, Eau Suave’s elegance would be terrific for a meal outdoors, but one at a garden party and not on a blanket on the ground.

For a fall picnic, Teresa turned gourmande and chose Brandy, Comptoir Sud Pacific Amour de Cacao, and Institut Très Bien Cologne à la Russe Eau de Parfum. Brandy she described as “a grown-up — delicious warm baked apple pie”. I wasn’t looking forward to trying warm apple pie on my wrist, but the scent is more sophisticated than Teresa’s description lets on. It would be perfect as a comfort scent on a chilly evening at home, and I’d recommend it to someone for whom Hermès Ambre Narguile is too viscous and foody. Amour de Cacao, on the other hand, is like wearing brownie batter and has the body and sweetness that so many of the Comptoir Sud Pacific scents have. Either you have the stomach for it or you don’t, and unfortunately I don’t. Cologne à la Russe Teresa describes as “sunny, yet warmed up with amber, perfect for in-between seasons and outdoor use.” Cologne à la Russe carefully straddles the line between a crisp cologne and amber, and I think it would be a good fit for either a spring or a fall picnic. I’ll be sad when my sample of it runs out.

But, you say, I don’t have a lot of money for picnic perfumes, what can I get on the cheap? Well, do you have $11.49? If so, you’ve bought yourself an ounce of Love’s Baby Soft, a scent with which Wendy, the Walgreen’s Beauty Advisor in my neighborhood, says you can never go wrong. Yep, they still make it and it smells exactly as you remember it. Wendy’s other recommendation for picnics is Jovan White Musk, which can be yours for $11.99 for half an ounce of “concentrated cologne”. It’s not Serge Lutens Clair de Musc, but it’s the next best thing for change that you might find in the couch. Wendy quickly dismissed Dana Tabu, Dana Chantilly, Coty Emeraude, and Antonio Banderas Spirit for picnics but suggested the Instyle line of fragrances, which send up “an impression of” scents like Estée Lauder Pleasures and Yves Saint Laurent Opium. She said that they’re light, and the purse size is only $1.99. I tried them, and I say save your money. You’d be better off with a dab of Hawaiian Punch behind each ear.

Note: image by Jersyko via Wikipedia.