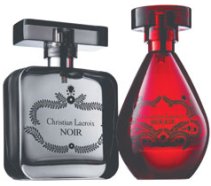 Christian Lacroix will launch a duo of mass market fragrances with Avon.

Christian Lacroix Noir for men is described as a "fresh, woody" fragrance. It was developed by perfumers Pascal Gaurin and Yves Cassar, and features ginger, saffron, cardamom, orris, white cedarwood, driftwood, vetiver and musk. Look for it in early 2008. (via Women's Wear Daily)

Update: per Cosmetic News, both scents will launch in the UK this September; Rouge will come to the US in November, Noir not until February 2008.

Victoria's Secret has launched the 2007 limited edition version of Very Sexy Now. This year's fragrance is a fruity floral...