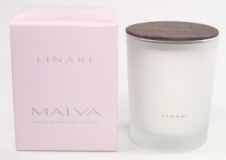 Having recently, and happily, reviewed Diptyque's Figuier, I thought to continue with the fig thread by introducing the Malva candle by Linari. One of their twelve available scented candles, Malva is elegantly packaged, with a frosted glass container with Linari etched all over it, and a rather nice Wenge wood lid that can also double as a coaster while the candle is burning. Linari claims to offer both 'seductive fragrance and pure design', and the design is certainly appealing in a minimalist sort of way.

I read the Malva description online, and was looking forward to the 'never ending fireworks of the delicate scent of green figs and bergamot', complimented by nutmeg, wild raspberry and cedar. Before I even opened the box, I could easily identify the green fig, but I was also hopeful that the surrounding notes would provide a very distinctive blend quite separate from some of the other fig based scents that involve coconut, almond, and a leafy sappy fig. This fig was definitely greener and brighter.

Once I lit the candle however, I was slightly disappointed at the amount of time it took to cast off a decent throw. I estimated a good hour before I really noticed the scent, and while I made allowances both for the frigid air we have been having on the east coast, as well as that being the first time lighting it, when I returned to the candle today it took the same amount of time. And even after an hour, it was never terribly strong. That may not be a disadvantage for those who seek a more delicate scent, but I found it hard to even tease out the different notes unless standing very close to the candle itself.

The first note to appear quite confidently was the green fig that had been seeping out from under the packaging. Slowly it began to combine with something a bit more interesting...almost salty, maritime, which does not appear at all in the Linari reviews. Bound up in that was a sudden rush of grapefruit, although I will recant under pressure if anyone insists that that is what wild raspberry smells like. I found it to have more flat citrus tones than round fruity, but perhaps the wild raspberry also includes the leaf which adds a crisp quality. In either case, it certainly adds a bit of light and sparkle to the scent, which then began to warm up and ease into what it really seems to be all about — nutmeg. It provides a solid warm base and the bergamot, although subtle, seems to find a comfortable perch there. The fig continues to dance lightly above them both, complimented by the fruit/citrus raspberry (or grapefruit!). But I was startled to find that everytime I re-entered the room the candle was in, I was greeted with a solid round prominent nutmeg tone. And I found no trace of cedar at all.

Although it's a very pleasant candle, I find the nutmeg a bit overpowering given the fig, fruit and bergamot expectations I had. I'm also not a huge fan of nutmeg outside of the holiday season, so perhaps I'm just being difficult. The candle does have a very clean burn, and while tipping the scale a wee bit toward the feminine side, it could definitely be appealing to both men and women if you like the particular notes that are used. It could be a good gift for someone who has high-end but discreet taste. But overall I just found it mildly uninteresting given the price. It is definitely not a cheap candle ($60) and at that price range I think it ought to leave more of an impression.

The Linari Malva is part of the Wenge series and can be purchased online at lafcony.com for $60 (6.5 oz) or in Europe at linari.com for 40 euro.