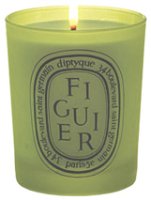 I first smelled Diptyque's Figuier on a cold grey October afternoon at a friend's weekend home, as we prepared tea and sat down for a major catch up session. I left feeling cheered by not only the conversation, but also by the lovely warm scent that had permeated the living room by the time I left.

Warmth could be seen as a contradiction in this scented candle that is described by Diptyque as coming "from the crushed leaves of the fig tree....slightly fruity, but mostly green", but nonetheless, it is there. The same perfume essence that is used in the beloved Philosykos scent is used in this candle and it has strong notes of fig leaf sap, but I did not detect any of the cedar or musk notes found in Philosykos — this is a fairly monochromatic scent. It is touted as one of the top sellers of Diptyque's well known candle line and I'm not surprised, as the green, slightly woody, sappy warmth is an easy going addition to any atmosphere, pleasing to both men and women.

Diptyque Figuier is not sweet, but just when it verges on the border of being pungent, the fig fruit undertones provide a mellowing effect. The occasional wave of solid fruit reminds me of biting into a fresh black fig with its sweet subtle meaty texture, but for the most part this is the scent I imagine if you crumple up fig leaves and wait for the sap to ooze out while the sun beats down on the pavement, warming your hair and the little green figs that will some day become soft, ripe and fleshy, but which for now are still hard, green and growing.

A similar leafy sap note weaves in and out of L'Artisan's fig candle, Interieur Figuier. Of the two takes on fig, the Diptyque is slightly bigger, somewhat bolder, and definitely cleaner. I would prefer this one as a unisex candle with an appeal suitable to hotel spaces, living rooms, home office or any other area where people are coming and going and don't want to be bogged down by a heavy scent but enjoy the relaxing ambience it provides.

I found the throw to be very satisfactory, although the 'green' seems to reach farther than the 'fruit'. The burn was fairly even though wax did cling to the sides of the glass, but I find Diptyque candles to be variable in this respect.

Diptyque Figuier is $48 for 6.5 oz candle; for buying information, see the listing for Diptyque under Perfume Houses.