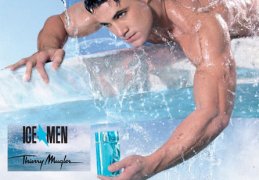 Thierry Mugler will launch Eau de Star for women and Ice*Men for men in April in Europe, September in the US. Both fragrances are based on the "powerful patchouli olfactory signature of Angel":

Ice Men has a fresh patchouli accord, by Jacques Huclier of Quest. The bottle with a star sculpted into the side, evokes the freezing of the water. (via cosmeticnews)

More than a fragrance, ICEMen is a blast of polar energy, invigorating and icy.  This woody and glacial-spicy fusion is ultimately virile and laced with iced coffee and frosted nutmeg for a dynamic harmony with its icy freshness. (via selfridges, where they will have it on counter by February)

Eau de Star is said to be similar to Angel Innocent, and has notes of patchouli, vanilla & mimosa. (via cosmeticsint)