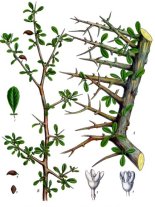 Myrrh is one of my favorite fragrance notes. I love the smell of myrrh and I burn the resin as incense. I always pay attention to fragrances containing myrrh (that is, when myrrh has a starring role in a composition) so when i Profumi di Firenze released Mirra (Myrrh), I expected myrrh to play a prominent role, but after smelling it I had to ask: “Mirra, where is the myrrh?”

Mirra's notes are Ethiopian myrrh, incense, woods and vanilla. Though I did not smell much myrrh (except in a few precious moments after Mirra’s application), incense or wood, I got blast after blast of sugary vanilla, vanilla with a hint of coconut, and finally 'vanilla flowers'. The Vanilla Monster swallowed the myrrh whole — didn’t even let out a myrrh burp.

Though Mirra was described as being "delicate" "powdery" even "lightweight" in ad copy and discussion forums, I found Mirra to be overpowering on me. The first time I wore Mirra, I put on half the contents of a tiny sample vial but I smelled like I had put on half a bottle, such was the power, the super sillage, of Mirra. Thank goodness for that sample — I would have made a terrible mistake if I had bought Mirra unsniffed. Not only would I have been unable to wear it, but it would not even fit on the 'perfume retirement shelf', where my misfit colognes ("I never loved you!" "I'm sick of you!" "Some gift YOU were!") go into service as room sprays till their expiration.

The type of myrrh scent I appreciate is typified by Diptyque’s L’Eau Trois. I don’t like my myrrh sweetened, but for those of you who love sweet vanilla scents with a touch of the tropics, Mirra might be fantastic. (Reviews of Mirra on MakeupAlley were unanimous in their approval of the fragrance, and those reviews stressed the writers' love of vanilla and its comforting "snuggly" aspect.)

Mirra is an Eau de Parfum with lasting power that must be experienced to be believed. I would say this scent is 100 percent in the feminine camp but men who wear Robert Piguet Fracas or Chanel No. 5 with aplomb might consider it.

A 50ml spray bottle of Mirra is $79. For buying information, see the listing for i Profumi di Firenze under Perfume Houses.