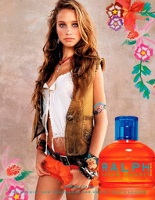 Ralph Rocks is the latest fragrance in the Ralph by Ralph Lauren line, which debuted in 2000 with Ralph, followed by Ralph Cool in 2004, and Ralph Hot in 2006. Ralph Rocks was created by perfumer Annie Buzantian, and the notes include passion fruit, kiwi, citrus, freesia, orange blossom, hyacinth, palm leaves, sun-bleached woods, coconut milk, sandalwood and amber.

Like the others in the series, Ralph Rocks is geared towards a young consumer (the tag line is "Rebellious, independent, free spirited. Add it to your playlist today!"). A brand spokesperson explains how the Ralph scents corrolate with your basic teenage-girl personality traits:

The Ralph Rocks fragrance appeals to a more rebellious girl with an attitude, who's free-spirited, hip and creative. The original Ralph was created for a preppy and confident girl, Cool for a trendy and adventurous girl, and Hot for her flirty and sexy side. (via Women's Wear Daily, 8/25/06)

From my vantage point (i.e., way, way older than the target audience for Ralph Rocks), it seems mildly ironic to try to capture the rebelliousness and independence of youth with yet another fruity floral — you might, I would think, more obviously assert your independence by not smelling like everyone else. But then, it is hard to be truly rebellious until you're old enough to not care what anyone else thinks about your clothes and your perfume. At that point, you can blithely spray on Comme des Garçons 2 and walk around smelling like ink if you want to, but meanwhile, Ralph Rocks is a nice enough scent if fruity floral is what you're after.

The top notes are very, very sweet tropical fruits. The citrus notes arrive within seconds, along with a bit of a fresh air accord, and happily the combination tempers the candied opening; it only flirts with smelling like a tropical beach cocktail. It calms to a sheer floral with creamy-coconut undertones; the longer it is on skin, the creamier it gets, but the coconut is under control: it never goes so far as to smell like suntan oil. After about 45 minutes, the fruits have largely disappeared, and Ralph Rocks is mostly a soft musky woods, more pale than dark and more cool than warm.

Ralph Rocks is very wearable, even likeable. And while it is sweet, sweet is relative. It isn't nearly so sweet as your average fruity floral geared towards the under-25 age cohort, and it doesn't even come close to the sugar-laden Ralph Hot.

When they released Ralph Hot earlier this year, I was puzzled by the timing — it seemed odd to launch a sweet, heavy gourmand in early spring. The timing for Ralph Rocks, which strikes me as very much a spring-early summer fragrance, is equally hard to understand, but then, Escada has been releasing tropical fruity florals every January with great success, so what do I know. Nothing.

Ralph Rocks is sold in 50 and 100 ml bottles of Eau de Toilette, and the lasting power is very good. A body lotion and shower gel are due to launch soon. You can find Ralph Rocks at boscovs, sephora, nordstrom and ulta, among others, and it will no doubt be at the discounters eventually.