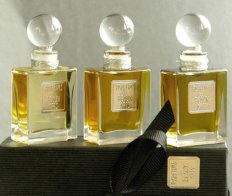 Cimabue, by Dawn Spencer Hurwitz, is today's topic, but to talk about Cimabue we need to start with yesterday's Safran Troublant. Of the three fragrances in the L'Artisan Les Epices trio, Safran Troublant was the one that originally garnered the most attention on the fragrance board at MakeupAlley. Early on, the only way to get the fragrance was to buy the complete Les Epices set, which included Piment Brûlant and Poivre Piquant, and which was originally released as a limited edition. This was a problem, obviously, if you A) didn't like Piment Brûlant and Poivre Piquant and/or B) adored Safran Troublant to the point where the little 15 ml bottle in the coffret simply wasn't enough Safran Troublant to tide you over for the rest of eternity.

Chattykathy, who at one time was a frequent poster on MakeupAlley's fragrance forum, was firmly entrenched in group B. She may have also been in group A (I neglected to ask) and I hope it goes without saying that Chattykathy is her screen name, not the name she uses in everyday, offline life. She decided to take matters into her own hands, and sent a sample of Safran Troublant off to perfumer Dawn Spencer Hurwitz in the hopes that Ms. Hurwitz would devise a reasonable facsimile and that she, Chattykathy, would never have to go without.

Cimabue is the fragrance that was born out of this confluence of events, and if it was merely a dupe of Safran Troublant, it would hardly be worth considering at any length, but in fact, it is a rather different take on the subject of saffron and an interesting fragrance in its own right. The notes include bergamot, bitter orange, cardamom, clementine, neroli, lemon, nutmeg, carnation, cinnamon, clove, rose geranium, jasmine, honey beeswax, rose, sandalwood, saffron, tuberose, ciste, sandalwood, labdanum, opopanax, benzoin and vanilla.

The first thing you might notice is the very long list of notes in comparison to the four listed for Safran Troublant (saffron, sandalwood, rose and vanilla). Of course, lists of notes are just that, lists of notes. They are meant to provide helpful clues, but they aren't recipes, and they are rarely complete. So it is perfectly possible that Safran Troublant actually contains more ingredients than Cimabue, but in this case, the lists give a rather accurate impression of the difference in how the two scents wear on skin: Cimabue is a considerably deeper, richer, and more embellished fragrance.

Yesterday I said that Safran Troublant was perhaps most likely to please a sandalwood-vanilla fan; Cimabue is more firmly in spicy oriental territory. It is warmer, foodier, creamier, and a bit sweeter. The floral notes stand out more, although no one flower dominates, and the dry down is more resinous. I will let Chattykathy tell you what it smells like...

...EXACTLY like Indian rice pudding. I used to make an Indian rice pudding with basmati rice, milk, cream, sugar, saffron, orange rind, vanilla bean and cardamon pods floating around in it. This is exactly what it smells like to me. Like I am leaning over the pot and taking a sniff. (via makeupalley)

Of all of the fragrances I've tried by Dawn Spencer Hurwitz, Cimabue is the most compelling, although I should qualify that by saying that I've only tried a mere fraction of her extensive line. I should also point out that Cimabue is listed on the Dawn Spencer Hurwitz website, ironically enough, as a limited edition, so if you fall in love with it, you may end up with worries of your own.

Cimabue is available in a variety of forms ranging from a .25 oz Eau de Parfum travel spray ($27) to a limited edition flacon of Parfum ($135, photo shown above). Samples are sold for $4 each. For buying information, see the listing for Dawn Spencer Hurwitz under Perfume Houses.