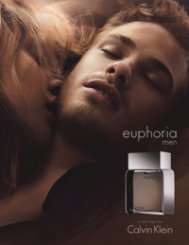 First, I’ll admit to being a long time Klein-o-phile, loving pretty much every scent the company has released, starting with the original Calvin. It’s true, there’s nary a Calvin Klein fragrance that I don’t like, or haven’t worn at some point in my life, including many of the women’s scents as well. That being said, I haven’t exactly turned cartwheels for the original Euphoria, finding it very sweet, almost cloying until the scent settles into those amazing basenotes (I’m still dying to try Euphoria Blossom). So I’m happy to report that Euphoria for Men shares the sweetness of Euphoria, but is pleasantly tempered by warm woods and green herbal notes.

Euphoria for Men opens with an accord that has that "I’ve smelled this before" feel. A typical ginger and pepper accord with a zesty twist of Japanese sudachi (a citrus fruit similar to yuzu) immediately recalls the opening to Lancome’s Miracle for Men. As the scent progresses, and there’s not a lot to tell here as Euphoria for Men has a very linear feel, it recalls 2002’s Truth for Men (one of my personal favorites) with its raindrop accord and light patchouli notes. In fact, it wouldn’t surprise me if Klein had initially conceived of Euphoria as a variation of Truth — maybe Truth Night for Men? Back to the Lancome comparison: whereas Miracle was anchored by a rich coffee bean note in the base, Euphoria stays lighter and brighter, and seems remarkably apt for any season. The basenotes are perfectly blended, but surprisingly quiet woods, amber and suede. Now and then I do get an echo of summer rain and dewy green leaves, but no single note really stands out.

So here’s my main beef: while other Klein scents were extraordinary and completely unique (i.e., Eternity for Men – the father of men’s marine fragrances; Truth for Men — a truly under-rated and magnificent green aroma; Obsession for Men — the groundbreaking men’s oriental), Euphoria for Men is simply "nice". It’s true! It smells great! But I was hoping for something richer, something slightly more unusual, and something, well, groundbreaking. But please don’t let my expectations dissuade you. Euphoria for Men is smooth, sexy, and completely affordable. It will be the perfect fragrance for sons and husbands around the world, and I’d even wager that for those of us who find Euphoria a "little much", the men’s version will be the perfect alternative.

Euphoria for Men is available now at imaginationperfumery or nordstrom, and will launch at other department stores this month.