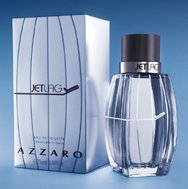 The juice, created by Givaudan’s Olivier Pescheux, is an invigorating airy citrus, with energising properties that reportedly help banish fatigue. The scent opens on notes of lemon, grapefruit, cardamom and pepper, leading to a heart of patchouli, cedar wood and amber. The base is a blend of incense, cinnamon and a tea-rose accord. (via moodiereport)

Jade Goody, the former dental nurse who became a star after appearing on the UK reality series Big Brother, has released her first perfume, Shh...

The scent itself was created by Robertet and features top notes bergamot and cassis with heart notes of pink pepper, cinnamon, cumin, freesia, jasmine, rose and iris. The drydown is woody with notes of sandalwood, patchouli, vanilla, amber mosss and musk. (via cosmeticsint)

I rather doubt this one will appear in the US, but who knows. Update: Jade Goody Shh... was pulled from most perfume stores after she was accused of making racist comments.