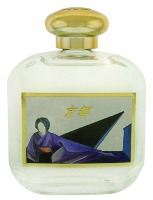 Città di Kyoto is the most recent of Santa Maria Novella's fragrances. It was released in 2005 to mark the fortieth anniversary of the sister-city link between Florence and Kyoto. The notes include iris for Florence and lotus for Kyoto; other notes include bergamot, orange, jasmine, hyacinth, rose, hawthorn, ylang-ylang, plum, peach, cinnamon, cypress, lavender, birch, sandalwood, gaiac wood, cedar, ebony, patchouli, ambergris and vanilla.

The citrus in the opening of Città di Kyoto is very soft and mild, and layered over prominent notes of hawthorn and iris. As it settles, the other floral notes join in, and there is a touch of sweet fruit, but happily (for me, anyway) no more than a touch, with a hush of spice in the background. The dry down centers on the wood notes, but with nothing like the clarity of Comme des Garçons Kyoto; here the woods are cushioned by the silky-powder finish of the iris and sweetened by the florals and a whisper of vanilla.

The first time I tried Città di Kyoto I thought it was nice but perhaps no more; on subsequent tries it has grown on me. Despite the profusion of notes, it is an understated fragrance, with a serenity that calls to mind Frederic Malle's L'Eau d'Hiver — but only in the vaguest possible way; they don't smell much alike other than the common notes of hawthorn and iris. Like Hiver, it evokes a cold, cloudy day, but as fragrances go, this one is fairly seasonless, and I should think it qualifies as unisex, although if it leans in one direction, I would say that direction is feminine.