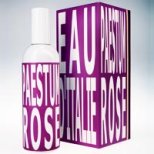 Eau d'Italie has launched Paestum Rose, a fragrance inspired by the roses that grow around the ancient town of Paestum, south of Naples:

Celebrated in Ovid and Virgil's poetry, the mysterious origins of Paestum's roses are lost in time: thought by some to be of a local species, others believe they were an acclimatised variety imported from the Orient. What is certain is that they flowered twice a year and their scent was unrivalled.

Famous for its perfumes, Paestum was also a centre of religious worship, where resins burned on temple altars scenting the air from afar. The rarest essences, the most precious spices were brought in from distant lands: incense, benzoin, myrrh and opoponax. Cinnamon, pepper and coriander. Osmanthus and papyrus.

Paestum Rose is available at Liberty in the UK. Update: see a review of Eau d'Italie Paestum Rose.