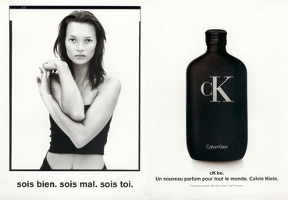 The follow-up to Calvin Klein’s ck one, the designer’s first unisex scent, 1996’s ck be celebrates it’s 10th anniversary this year, and due to some strong word-of-mouth, I decided to give it a try. Ck be has notes of bergamot, juniper berry, mandarin, mint, lavender, magnolia, peach, amber, sandalwood, opoponax and tonka bean. Though it’s described as a musk scent, musk is not listed in the pyramid.

Ck be opens with a citrus rush of bergamot not unlike ck one. The juniper and mint add brightness and from there the scent begins to fade. The peach seems to be blended into the base and instead of creating a fruity effect, here it merely softens and adds a crispness to the tonka bean. The strength of the scent is disappointing and it took quite a few sprays to really be able to get a sense of the composition. But after two hours, I’m left with a subtle skin scent, like the remnants of a juniper and citrus body wash. Not really a distinct aroma, just a whisper of clean.

A devoted fan of Calvin Klein’s earlier men’s scents (Obsession, Eternity, Escape, and most recently, Truth for Men) I somehow avoided ck be when it was launched. Not a fan of ck one, having been overwhelmed by its popularity upon release (it seemed to be everywhere!), I suppose I summarily dismissed be. I can see ck be becoming a comfort scent for me — something simple and clean and appropriate to wear to the gym or perhaps while lounging at home. This is a safe bet for teens and boyfriends who might unwittingly tend to overapply scent. Happy Anniversary ck be.

Ck be may be purchased…just about everywhere.