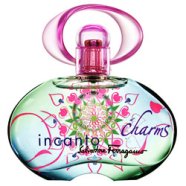 Salvatore Ferragamo will launch Incanto Charms in Italy & Japan in January, in other markets in March:

The floral-fruity juice was created by IFF’s Beatrice Piquet. It opens on notes of passion fruit and honeysuckle, leading to a heart of jasmine and ottoman rose. The base is a blend of white musk and Amyris wood.

Ferragamo Incanto Charms is an Eau de Toilette, and is available in 50 and 100 ml.

Look for Apparition Sun, a limited edition from Emanuel Ungaro, in March:

The reworked juice is a fresh floral. It opens on a pink grapefruit sorbet accord, mixed with raspberry leaves. At the heart is a blend of rose and freesia; musk and white cedar wood make up the base. (both above via moodiereport)

Nautica Voyage by Nautica will debut in April:

Voyage was blended by Maurice Roucel of Symrise. The heart of the scent features a "sailcloth accord," which is described as a mixture of hemp, air and sea aromas. The heart of the scent, which also includes mimosa and water lotus, is preceded by top notes of green leaf and apple and followed by a base of cedar wood, musk, moss and woody amber.

From CB I Hate Perfume: a limited edition for the holidays, Gingerbread, with Chinese Ginger Root, Indian Nutmeg, Cinnamon Bark, and a smoky vanilla-like base.