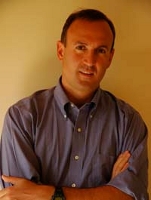 Chandler Burr is the author of Emperor of Scent, the fascinating book about Luca Turin and his theory of smell. He is also the New York Times writer on scent. You can read his articles about perfume on his website, and you can also take a look at his 10 favorite fragrances.

If you have not read Emperor of Scent, you might also want to look at this interview with Chandler Burr for the website parfumessence.

You came to appreciate fragrance while working on the Emperor of Scent. Can you recall a few of the perfumes that initially captivated you?
I was fascinated and a bit disturbed at first by the degree to which I *didn't like—couldn't access, didn't understand— some of the perfumes that Luca loves, specifically the classic Guerlains and Carons: l'Heure Bleue, Shalimar, Après l'Ondée, Vol de Nuit. These are the olfactory equivalents of 19th century French literature—smelling Chamade today is in almost every aesthetic sense identical to reading Stendhal today: the sentiments, reference points, emphases, and values all differ from those (or those most common) of our time, and you can find yourself lost. They require work. I've spent years with them, and I'll never have an instinctive love of them. I don't like Hugo either. Too much *stuff. But I can, now, appreciate their construction and their importance.

Luca Turin, obviously, has strong opinions about perfume. To what extent did his tastes influence your own as you began to get more interested in fragrance? Are your tastes very different now?
The answer to this continues the answer to the above: I didn't pick up Luca's love of Shalimar, but he profoundly influenced me on every single level regarding (for example) Guerlain, from the purely intellectual (what is the guerlinade, how was it created) to the aesthetic (his rich, brilliant descriptions) to the historic and emotional. I never considered Gucci's Rush much until I read his description, at which point I went back and found myself completely reconceiving my reaction to the fragrance; I love Rush now. That's not me altering my instinctive tastes but rather taking a second cut at things.

I'm not sure that my tastes have changed much. I've always disliked vetiver and smoke; I've never been a fan of Guerlain's Vetiver , and to me Yves Saint Laurent's M7 is an example of the smoking remains of a nuclear war masquerading as a fragrance. I've never liked orientals. What has changed most is, perhaps, my willingness to learn. Comme des Garcons 2 was a fragrance I hated from the start. They sent it to me, and it sat on a shelf in my fragrance library, and as the library grew I'd take it down and smell it once every three months and put it back. And then one day, I found myself suddenly changed. It's a scent I love now. I mean *love. Which is really weird. But things do change, our tastes, what we expect, what we know. I never liked Eau Sauvage—I'm not a fan of those dark super-freshes—but when I smelled Frederic Malle's Bigarade, which I found fantastic from the first molecule, I went back and tried Eau Sauvage again, and I still didn't like it—but now I saw more in it, if that makes sense. I once spent an afternoon at the East Wing of the National Gallery with a Ph.D. in art history, and he showed me all sorts of paintings and explained all the things in them that he saw and that were invisible to me, and I feel like Luca has not transferred his tastes to me; he has made infinitely more of fragrance, all aspects of them, visible to my eye.

Like many of the "fragrance obsessed", I started by smelling everything I could get my hands on, and only much later did I become interested in the process by which perfumes were created. What little I have learned since then about the inner workings of the fragrance industry has been somewhat disenchanting. I am wondering if your experience, where you learned about fragrance from "the inside" as it were, has given you a particularly cynical attitude about the process by which new perfumes are created and marketed today, or would you say the opposite?
I couldn't have had a more opposite reaction, and I think I can explain that very simply: I'm a science journalist (by practice, if not training; by training I'm specialized in international economics and Japanese politics), and I depart from a sort of relentlessly clinical, empirical approach upward toward the aesthetics of perfume. In fact the machines I love most in perfume are the synthetic molecules built in the laboratories that supply the perfumers with their materials. Ethyl maltol and beta-damascone and cis-3-hexenol—I love them, I find them utterly enchanting, how they're synthesized, what they can do, so much more than the tired old naturals. Maybe it's because of the crap that PR people attempt to feed me all the time in my Times reporting, the hackneyed "here are the notes!" clichés (who cares), the excruciatingly boring, calculated, and irrelevant marketing mantras: "Oh, and it's got rose and jasmine and ylang ylang and.. !" Kill me now. Or better, kill yourself and let me talk with the perfumer about what's actually in there, the Iso-E Super and sweet ethereal methyl acetate (CH3-C(=O)-O-CH3), what they do, how they work, how they create the scent we're smelling. It's awesome. It's artistry. People (ignorant people) say, "It's artificial," which is the same thing as saying that Joan Mitchell's and Kandinsky's having used synthetic paints reduces the aesthetic value of the paintings you see. Please.

One of the ways in which I see cynicism expressed by other fragrance fans is a presumption that fragrances from the smaller "niche" houses are likely to be better, or at least more interesting, than those which are produced for the larger department store market. News that Serge Lutens, for instance, is about to release a new fragrance generates considerably more excitement on the fragrance forums than the latest release from Calvin Klein. Do you see any difference in the quality of niche vs mass market perfumes, or do you think the division is meaningless?
I completely agree that there is a degree of snobbery involved in this often-made distinction. The question is how much of the distinction is snobbery, and how much is a valid aesthetic judgment. Snobbery apart—I couldn't possibly care less if a great fragrance comes from Calvin Klein or JAR—I do flatly believe that the niche houses are just producing better stuff. Chanel, when it comes to its feminines (I also think that dividing perfumes into masculines and feminines is ridiculous), does a solid job. (I don't like Chanel's masculines, although I think they're well-built.) Lauder and Dior are huge commercial giants, and they make some very nice things. But you're just not going to get anyone more inventive than Frédéric Malle or l'Artisan Parfumeur or Bond No 9. Look at Fresh—they're now partly (partly) LVMH, but Lev still retains full creative control, which means that they continue to come out with great, inventive, delight-inducing things. The niches don't bat a thousand (no one does), and they've got competition from Hermès (the inestimable Ambre Narguilé) and Dolce & Gabbana (the mesmerizing Light Blue) and other big guns, but, as a whole, if I had to choose, yeah, I'd personally go small right now. (Luckily I don't have to choose.)

Who do you think is doing the most interesting work in perfumery today?
It's impossible to answer this, A because the answer changes constantly, B because once you start you want to make an exhaustive list, which you can't because A the answer changes constantly. Along with my answer above, I'd add anecdotally JLo's Miami Glo—amazingly perfect commercial creativity. I love it. It's exactly what she and her marketing team want, and if you take it on that level alone, it's worth a smell. Contrast it with Norma Kamali's terrific Beach, which is the same concept, executed with a completely different aesthetic—Lopez has you on the sand in South Beach with her girls from the block, the exhaust from the cars on the strip, the slightly-too-much makeup, the testosterone of the boys hanging around watching the sun heating up the cheap, luscious coconut oil on their exposed stomachs; Norma puts you on a lonely sand dune with the wind and the salt and the warmth of a remote, cool summer. JAR is awesome. (The store is on rue Castiglione, between the Place Vendome and the Tuileries.) Alexandra Balahoutis' Strange Invisible Perfumes is making a virtue of necessity by creating an entire line of fragrances from an exclusively natural palette, and her things are like dark, subtle, diaphanous dreams.

Your next book will expand on the article you did for the New Yorker on the creation of the latest Hermès scent, Jardin Sur Le Nil. What else can you tell us about the book, and when can we expect to see it?
It'll be launched Spring of 2007. I expect about a third of it will be my behind-the-scenes experience with Hermès—after spending eight months with them the New Yorker article was necessarily the tip of the iceberg. My publisher at Henry Holt, John Sterling, proposed to me that I tell it in the first person, my reactions, everything from the crap to in my opinion the sublime, something I'd never thought of. In a few weeks I start following from the inside the next creation process at Fresh and, perhaps, at Estée Lauder, and the last narrative thread in the book will be my telling the story of how a major international corporation is now in the process of creating not a visual logo—the Nike swoosh, the Mercedes star, the McDonald's arch—but a scent logo for its products, an olfactory branding, a corporate smell.