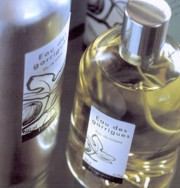 Eau des Garrigues starts with fig and citrus. The fig is strong in the top notes, but the sweetness is minimal at most: it does smell more like fig leaves than the fruit. The fig fades somewhat as the fragrance settles, but Garrigues stays very dry, almost dusty, and the combination of leaves and spices produces an accord that smells very much like green tea leaves, maybe even gunpowder tea with its slight hint of smoke. The floral notes are subdued but soften the harsh edges a bit, and there is quite a bit of oakmoss.

Eau des Garrigues is my favorite of the Fragonard Naturals. It smells green and summery, with woody undertones, and the spices give it a nice kick. It is very much a unisex scent, and has reasonable lasting power.

For purchasing information, see the listing for Fragonard under Perfume Houses.

Update: Eau des Garrigues has since been discontinued, although a new fragrance in the Naturals line, Figuier Fleur, appears to have identical notes; perhaps it has just been renamed.