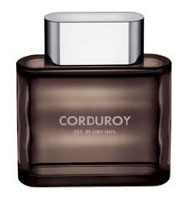 Façonnable is launching Façonnable Stripe, a "fresh, spicy, blue-tinted scent" for men, this month. (via cosmeticnews) Façonnable Stripe is an Eau de Toilette, and is available in 30, 50 and 100 ml and in matching grooming products. It was created by perfumer Gerard Anthony, and the notes include mandarin orange, grapefruit, mint, cinnamon, nutmeg, geranium, rose, amber, sandalwood and cedar.

Zirh will launch a new men's scent, Corduroy, this summer:

Quest blended the scent, which features an olfactory accord called Aquacoral — described as the aroma of undersea coral. Corduroy also features notes of grapefruit and mandarin, bay rum and cinnamon and cedar wood and sandalwood.