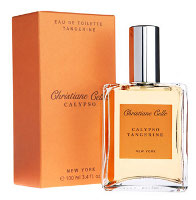 The top notes are a nice rush of sparkling citrus with a touch of lemon zest. After a few minutes, it takes on a slight undertone of anise from the tarragon, no more than a hint, really, and shortly thereafter is joined by one of my favorite summer smells: fresh-cut grass. The floral notes are very restrained, although I can just make out the hyacinth and violet. The green tea and black currant are more pronounced, with the tea adding a faint, short-lived note of smoke. I can’t smell the amber at all.

Homme is not what I would call a complex fragrance, but it is very cheerful and summery. Despite the name, it can easily be worn by either sex. I believe I read somewhere that it is Calypso’s second biggest seller, and I wouldn’t be surprised if a large percentage of the purchasers are women. It is certainly less masculine than many other fragrances marketed as unisex.

It is not terribly long lasting, maybe a few hours at most, but it is reasonably priced at around $50 for 100 ml. For availability, see the listing for Calypso under Perfume Houses.

Update 11/06: Calypso apparently decided that this isn't a masculine scent; they've renamed it Tangerine and are now positioning it as a unisex.