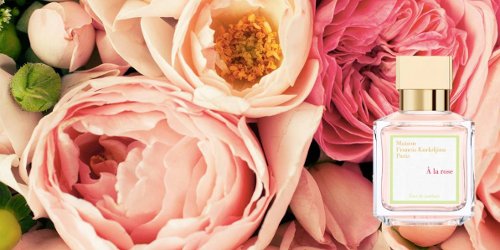 Roses, roses all the way! It’s the annual spring rush of my favorite flower in fragrance. I’ve recently reviewed L’Artisan Parfumeur Rose Privée and Aerin Rose de Grasse, and today I’m taking a close sniff of Maison Francis Kurkdjian’s À la Rose. Yes, it’s another “ode to femininity,” another homage to the rose fields of Grasse, another pink juice…but I’m still not tired of roses, so onwards we go.

In À la Rose, “an eau de parfum that evokes the crisp tenderness of rose petals and a radiant aura” as well as “a free-spirited elegance,” Francis Kurkdjian has brought together notes of Damascena rose, Centifolia rose, bergamot, orange, violet, magnolia blossom, cedar wood and musk. (As Robin earlier noted, the fragrance was inspired by Marie Antoinette’s love of roses and the painting Marie-Antoinette à la Rose by Louise Elisabeth Vigée-Lebrun…) 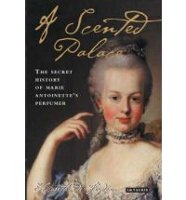 During the reign of Marie Antoinette, more than 5,000 people lived and worked at Versailles. Given the resulting chamber pot situation, you can understand why she spent a few thousand livres a year on perfumed toiletries.

Like other royal purveyors, Marie Antoinette’s perfumer Jean-Louis Fargeon had an intimate view of the queen’s troubled tenure and the Revolution’s bloody reforms. But unlike the majority of the queen’s circle, which was prone to spending recklessly and engaging solely in frivolous pastimes, Fargeon was a competent businessman and an intellectual who would actively support the Revolution’s aims (if not its executions). Drawing on Fargeon’s papers, historian Elizabeth de Feydeau’s A Scented Palace: The Secret History of Marie Antoinette’s Perfumer is an illuminating biography of the reviled queen and a rich introduction to the era’s perfumed luxuries.

As a member of the merchant class, Fargeon’s education included the philosophy of the Enlightenment era, as well as the art and science of his skilled trade…

As previously reported, Sillage de la Reine, a Marie Antoinette fragrance, was recently recreated by perfumer Francis Kurkdjian. It is now available for sale at Versailles:

Indulging in a work of reinterpretation, Francis Kurkdijan [sic] has created a “ghost of a perfume” using only one hundred percent natural products. We discover the intensity of rose, iris, cut jasmine, tuberose and orange blossom. This fragrance is modulated by fine woody touches of cedar and sandalwood. To perfect the composition, two magnificent base notes were added…

…And, most evocatively, a powder-blue cabinet room, festooned with peacocks (an emblem of motherhood), with chair handles carved in the image of her favourite dog. This was the queen’s refuge, her powder room, in effect, and one still holds one’s breath in anticipation of its rouged, fragrant occupant. It was here that Marie Antoinette sought solace from stifling palace etiquette. As with today’s celebrities, chief among her confidants were her fellow image-makers: her couturière, Rose Bertin, her hairdresser, Léonard, and her perfumer, Jean-Louis Fargeon.

Read the rest of the article here, and many thanks to Ruth for the link.

Each day, she dipped in a tub laced with a confection of blanched sweet almonds, pine nuts, linseed, marshmallow root and lily bulb, then rubbed her body clean with a sachet of bran.

A Scented Palace is about Marie Antoinette’s perfumer, Jean-Louis Fargeon. You may remember that last year Francis Kurkdjian recreated Sillage de la Reine, one of the perfumes Fargeon developed for the Queen, after Feydeau discovered the recipe in the French National Archives…