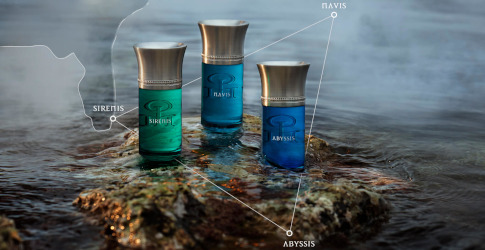 From Ulysses' Odyssey to Shakespeare's Prospero, Les Eaux des Bermudes is a tribute to the legendary tales of the adventurers of the seas, leaving room for all the heroic exploits as well as all the fears, and the oldest legends.

Abyssis ~ "Long ago in Norse sagas from the thirteenth century, I was described as the largest monster of the sea, giving rise to all fears as well as to the oldest myths. A colossal creature capable of capsizing and swallowing an entire ship with its crew. Rising up from the watery depths with my tentacled arms, I haunt nights at sea with my abyssal scent. I am a giant monster that can devour immense wooden hulls, and I cannot be defeated. More powerful than winds and tides, I am the Kraken, a creature of the depths. ABYSSIS is my sea power." Developed by perfumer Louise Turner, with calypsone, white and black pepper, cedar, ambrofix, sandalwood, styrax,  cosmone and sylkolide.

Navis ~ "Made by men who dream of far-off places and distant voyages, I am a refuge floating in the middle of the ocean. A wooden ship, my hull is infused with salty water, caressed by waves. Navigating the border between air and water, I am the frontier between two elements. While my hold protects treasures of scents, rich with citruses and rare spices, my sails fill with iodized wind and blazing sun. I embrace mist and I brave storms. I defy the furious waves with my love for joyful, dangerous seas. I am a drunken boat of odysseys. NAVIS is your journey." Developed by perfumer Nadège Le Garlantezec, with ambrette seeds, pink pepper, grapefruit, bergamot, laminaria algae, oak moss, amyris and cedar.

Sirenis ~ "Languid on my salty rock, I am the daughter of a river god and a muse. My song is a bewitching whisper traveling over the waves like an irresistible, enchanting perfume. My divine voice is one with my magical powers, making sailors lose their way. Famous navigators say they have encountered me near archipelagos where I love to play my charms. I am a mythical creature, half-woman, half-fish. Beautiful and supernatural, I am the Siren. Can you resist my song of love? SIRENIS will be your temptation." Developed by perfumers Sonia Constant and Marion Costero, with bergamot, clary sage, cardamom, marine accord, driftwoods, rose, transparent flowers, genet, sandalwood, amber, musk, patchouli, moss and vetiver.