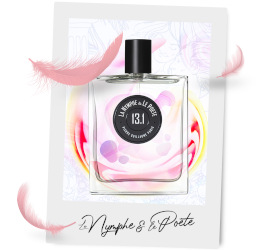 THE INSPIRATION Romanticism, Romantic Poetry of the 19th century. At the beginning of the XIXth century, a new sensitivity magnifying the expression of feelings to the passions inflames Europe. Resulting from political and social upheavals, it is first of all essentially political. Questioning people on their deep aspirations in the face of authoritarian dynasties, it puts artists before an uncertain and dark destiny. Nourishing their imagination, opposing feeling to reason, it becomes a cultural movement seeking through exoticism, mythology, irrationality, melancholy, and passions a means of escape and delight.

THE FRAGRANCE A Rose-Tea with accents of violet and spices. The singularity of an original material: the absolute of rose-tea leaves whose complex greenness responds to the amber warmth of the branches of Cistus.

THE NAME An imaginary idyll between the nymph Erato and the German poet Novalis.