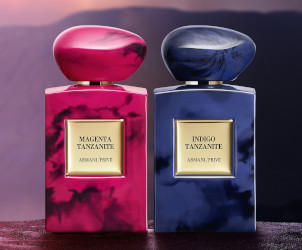 The new fragrance duo INDIGO TANZANITE and MAGENTA TANZANITE are a tribute to the spectacular, vivid colors of Africa.

Magenta Tanzanite ~ "Magenta Tanzanite reinterprets the tanzanite stone in a magenta hue, conjuring an atmosphere suspended in time, when savannah awakens. The roasted warmth of a unique blend of tobacco leaf and coffee, constrated by a fresh & spicy top of cardamom, ginger and bergamot, expresses this moment of serenity, against the backdrop of a wild, natural environment." Additional notes for the spicy oriental include cinnamon, myrrh, tonka bean and vanilla.

Indigo Tanzanite ~ "Indigo Tanzanite is an evocation of the mysterious aura of the Tanzanian plains, and their sumptuous skies at night, reminiscent of tanzanite’s intense purple-blue color in a dark yet enchanting composition. A fresh top of bergamot essence and almond accord creates an enveloping and luminous effect, while milky and heliotrope accords bring smoothness to this woody fragrance at the heart. A mysterious patchouli is faceted by balmy and ambery notes, reminiscent of the contrasted atmosphere of a dark yet enveloping night." Additional notes for the woody oriental include labdanum, benzoin and tolu balsam.