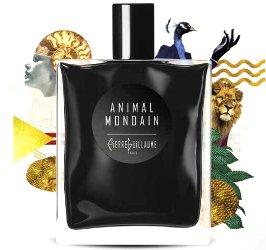 French niche line Pierre Guillaume will launch Animal Mondain, a new unisex fragrance in the Black Collection. Animal Mondain was inspired by the 1930s and modernism.

Mass culture from the United States seeks in Hollywood glamour, crooners, swing and Broadway musicals an antidote to the Great Depression. Modernism was then spread throughout society thanks to currents such as Art Deco or Bauhaus, while cinema glorified its new icons such as Greta Garbo, Jean Harlow or Marlene Dietrich. The latter would influence women all over the world by imposing in the unreal cloud of her cigarette smoke a style oscillating between assumed androgyny and theatrical glamour.

“Between the spicy ardor of Cozé and the balmy and liquorish opulence of Liqueur Charnelle, Animal Mondain interposes itself as a new Tobacco in my production. Stripped of all artifice, it is a gender free olfactory creation inspired by the modernist architecture of a Mallet-Stevens smoking room. The bursts of laughter of a social society happy to feast there splits the tobacco volutes that stretch gently on the leather armchairs and along the pear tree and mahogany woodwork...” Pierre GUILLAUME

The notes for the woody tobacco include pear tree leaves, tobacco and mahogany wood.