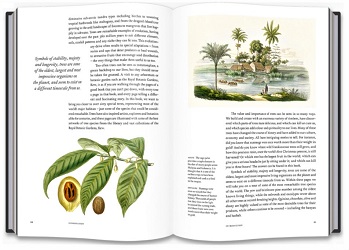 Being trapped inside is not good for the psyche; so, since March, I’ve spent as much time outdoors as possible. And even if this winter is the rainiest, coldest, darkest on record in Seattle, I’ll be outside awhile each day…to keep sane.

Gardening and gardens have always been important to me. I was introduced to planting and caring for plants by my maternal grandmother, a tough, never-tired/always-working woman (I do believe she 'slept' with one eye open and a to-do list running through her thoughts). Almost the moment I planted my own seeds under her supervision, I started reading about my plants. Their history was fascinating and learning about them took me all over the world. Some of the plants I “knew personally” had ancestors from Japan, China, South America, the Mediterranean and this thrilled me. 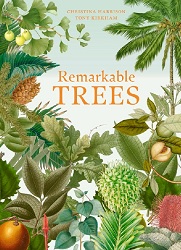 I just finished reading the wonderful (and beautifully illustrated) Remarkable Trees by Christina Harrison and Tony Kirkham (The University of Chicago Press, 2019). This book tells the story of 68 tree species from around the world – their growing habits AND associations with culture, shelter, food, medicine.

I’d like to introduce you to eight species from Remarkable Trees…some with connections to perfume. 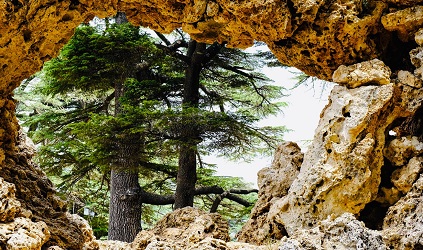 Native to the eastern Mediterranean, Cedrus libani (Cedar of Lebanon) has been loved — and exploited — since ancient times, by Phoenicians, Israelites, Persians, Romans and Egyptians (cedar resin was used in the mummification process). The ancients loved the tree’s perfume, and its strength and durability as a building material. Leprosy was treated with cedar extractions.

The last grove of C. libani in Lebanon is on Mt. Lebanon and is called the “Cedars of God” (it’s listed as a UNESCO World Heritage Site). Other true cedars are C. atlantica (Atlas cedar) that grows in Morocco and Algeria; C. deodara from the western Himalaya (deodara means “timber of the gods”); and C. Brevifolia from central Cyprus.

Several other tree species are incorrectly called “cedar”: Western red cedar (Thuja) and Incense Cedar (Calocedrus). The famous Juniperus virginiana has been called the “pencil cedar” due to its use in making, you guessed it, pencils; it has a wonderful aroma. 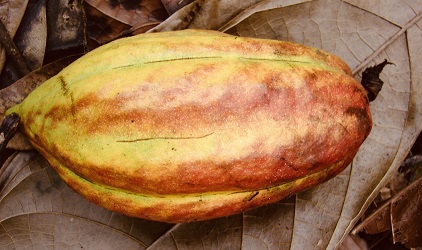 Cacao has been used for over 5,000 years. The Mayan name for cacao is “kakaw”/”kakawa” (“Theobroma” means ‘food of the gods’). The Aztecs preferred their cacao in liquid/drink form and it was consumed cold, not hot. Cacao was reserved for high-caste men; commoners, women and children were not allowed to taste the drink. Montezuma II was a chocoholic and flavored his cacao drink with vanilla, chili, spices, honey, flowers and herbs.

In the 19th century, chocolate processing was improved by two Dutchmen, chemists Casparus Van Houten and his son, Coenraad Van Houten; their patented "Dutch process" produced (less-bitter) cocoa powder which led to smoother chocolate drinks and hard chocolate, too. As you savor chocolate, assuage guilt by remembering dark chocolate is full of antioxidants, rich with phenols and flavonoids.

WHO KNEW?: Cacao is a member of the mallow family that includes hibiscus and okra. 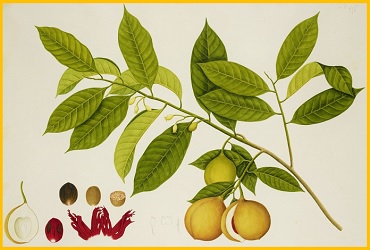 Nutmeg is an Indonesian native. It’s a dioecious tree — male and female flowers grow on separate trees. Nutmeg fruits resemble apricots and you get your money’s worth with nutmegs: the outer skin can be made into jam/jelly or candy, and surrounding the nutmeg seed itself is a bright, orange-red lacy seed cover – mace (a favorite spice in my apple pies).

Nutmeg essential oil is made from ground nutmegs and is used to flavor and scent food/drinks, cosmetics, cough syrups/medicated elixirs and perfumes. (Thailand makes many wonderful nutmeg-scented products, including perfume-like medicated oils.)

Nutmeg was once one of the most prized trading items in the world, worth more than its weight in gold. At the height of its trade, a bag of nutmeg costing the equivalent of $1 in Indonesia would sell for $1000 in Europe.

There were ‘nutmeg wars’ between the Dutch and English in the 17th century. When the English bought the island of Rhun in 1603 to grow nutmeg, the Banda Islands-based Dutch East India Company did all in its power to drive the English away from Indonesia and maintain the Dutch monopoly on the spices of mace and nutmeg. Finally, in 1667, the British gave up on maintaining Rhun and traded the island for another island…Manhattan. Shouldn’t a nutmeg be on the Seal of New York City?

Nutmeg is being studied as an anti-depressant. Let the nutmeg-grating begin! We’re in for a long fall and winter.

WHO KNEW?: It’s suspected that one of Heinz Ketchup’s mystery ingredients is — nutmeg. 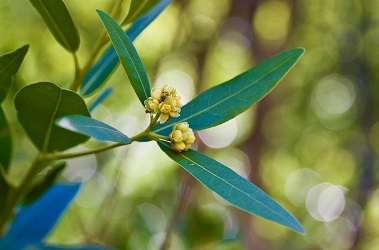 Indigenous “Californians” used the headache tree’s leaves and fruits in poultices to ease headaches (major irony: the pungent aroma of this tree can induce migraines in those prone to that horrible condition). The leaves contain the chemical umbellone which can irritate eyes and noses, too.

I visit a beautiful, huge headache tree all year here in Seattle and never fail to pick a few leaves and crush them between my fingers or palms. The scent is creamy, minty, “green.” I always thought the aroma would be great in citrus colognes but imagine the “headaches” at IFRA headquarters at that suggestion! 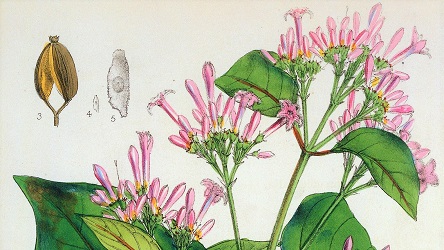 Quinine (from the bark of the cinchona tree) is a natural alkaloid preventative and cure for malaria. It’s native to the Andes where I’d love to visit it in situ (the lovely flowers have a great scent).

The tree is named after the Spanish Countess of Chinchón (1576-1639); yes, Carl Linnaeus misspelled her name (the Latin name should be Chinchona...why hasn't someone changed it?) Quinine's most interesting aspect to me is the British/booze connection. British colonists in tropical climes took their preventative medicinal dose of quinine in tonic water — with added gin, sugar and lemon. The gin and tonic was born…along with many other delicious quinine-flavored beverages: Dubonnet, Byrrh, Cocchi Americano, Barolo Chinato and my favorite soft drink, Pellegrino chinotto.

Cheers to quinine — a great drink additive and savior of millions! 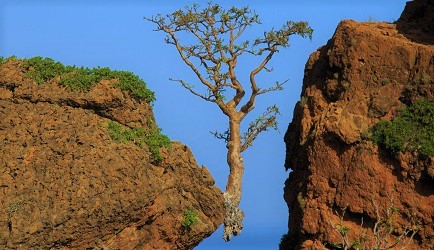 Frankincense has been used for millennia to scent the air and humans. The lucrative trade in frankincense started about 5,000 years ago on the Arabian peninsula. The beautiful city of Petra, Jordan, was built by Nabataeans with money earned via the incense trade and the UNESCO World Heritage Site of “The Land of Incense” is in Oman.

A wound to the Boswellia sacra results in exudations of a gum/resin which hardens into “tears.” As with sandalwood, popularity leads to over-harvesting and endangerment. The use of frankincense in perfumery has had dire consequences for the trees in Somalia.

LORE: the Phoenix built its nest in frankincense trees and fed off its tears (I’m imagining a Phoenix rolling some frankincense tears around its mouth as we would a sweet lozenge). 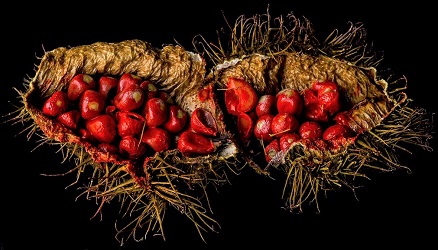 Originating in South America, annatto’s orange-red seeds are used around the world to color lipstick and other cosmetics, and foods (like cheeses, butter, margarine, popcorn, custards, cereals). When annatto’s red dye is mixed with oil, it can add a nice red gleam to hair or be rubbed on skin as a double-duty sunscreen/insect repellent. Annatto is second only to saffron as a natural colorant.

Indigenous people used the dye as a body paint and as a spice for food (it's also referred to as achiote). Aztecs added annatto to their chocolate drinks and used its red color for manuscript art in the 16th century. Spaniards appreciated annatto in the 17th/ 18th  centuries as a dye for silks. 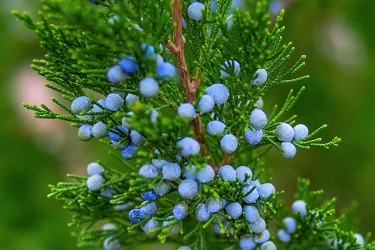 The common Juniper has the largest geographic range of any woody plant, but as with quinine, my interest lies with juniper’s use in alcoholic drinks.

Juniper berries form on female trees as small “cones” containing only 2-3 seeds. Berry-like at first, these cones can take 2-3 years to mature and ripen to a purple-black color with the characteristic blue-hued bloom on the “berries.” The juniper berries are used in cooking and in…GIN.

The word “gin” is related to the French word genièvre, Italian ginepro and Dutch jenever — all names for juniper. Juniper berries are the only botanical that MUST be in gin for gin to be called gin…so there.

FUN FACT: juniper wood is burned to smoke food and it produces an almost invisible smoke. I ask you: who would appreciate almost-invisible smoke? In the Scottish highlands of days gone by, those who illicitly made whiskey on the sly, that’s who. Product developers: what about some "smokeless" juniper incense? 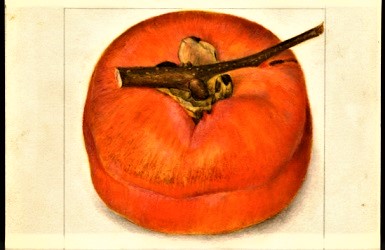 One of the trees from my childhood that I often remember (why didn't I photograph it?) was an elegant, towering persimmon tree. It grew all alone, along a path that went from my house to my great-aunt's home, where my father had a concord grape arbor, fruit trees, a vegetable garden, pet chickens and his seven cats. This persimmon tree looked like a palm tree...with a long, branch-less body leading up to the leafy top where the fruits formed. How many thousands of times did I touch it as I walked by it over the years? I can see my father leaning on the tree, his cats gathered nearby to greet him, and fields and woods beyond. Since my parents' deaths, I've never returned home even once, but I keep hoping the persimmon is still alive...and cherished by someone.

I don't know if my persimmon was a Japanese persimmon or a Diospyros virginiana (the American "common" persimmon). What is known as the Japanese persimmon actually came from China, but Japanese artists and gourmands revered the fruit over the centuries. Japanese persimmons are naturally dried and eaten as sweets (hoshigaki). The most prized persimmons are the "astringent" ones, that must ripen on the tree before eating; they're superior in flavor to the non-astringent varieties. Persimmons are not only lovely trees with delicious, beautiful fruits, their autumn foliage is sensational to behold.

In America, the native persimmon was no less loved: Indigenous people used its wood, bark and fruit. During the American Civil War, the persimmon's dried seeds were made into buttons for soldiers' uniforms.

Trees have provided humans (and animals) with food and shelter and medicines. They've inspired poets, painters and sculptors, explorers and gardeners. In our rapidly heating world, trees provide oxygen that we breathe, they trap pollution and are carbon “sinks.” Of an estimated 60,000 tree species on earth, 8,000 are currently threatened by extinction, and that number is growing. 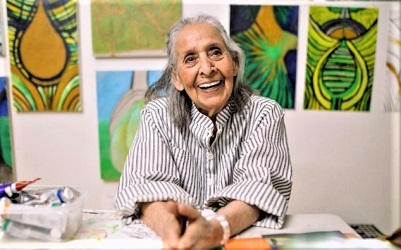 I dedicate this post to the inspiring artist Luchita Hurtado who died in August at age 99. In one of the last films she made (believe it or not, she's 98 in the clip), smiling broadly, delightedly, she paints a tree...and then hugs it. “We’re all on this planet together; we’re all related and our closest relative is a tree — because they breathe out and we breathe in.”