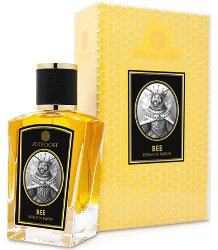 Bee is just irresistible! Opening with a luscious, jellied orange and a smattering of meadow flowers, the honey accord is both extremely realistic and un-animalic – a rare feat that makes Bee a real contender for the title of the baby bear’s porridge of the honey fragrance genre.

Set deep in a bombastic surround system of glittering amber and incense, the quietly golden floral honey center is magnified and broadcast until it fills the room, creating an incredible sillage that trails after you like the waves made by the Titanic. Though enormously rich and deep, the honey draws upon a doughy beeswax note to muffle its sweetness, and a softly musky, woody base of sandalwood and benzoin to keep it from sliding off into honey’s more animalic facets. Honey is such a difficult note to do well – and, in our opinion, Bee is an unmitigated triumph.

Zoologist Bee can be found now at Luckyscent in the US or Etiket in Canada, in 60 ml Extrait de Parfum. It is currently available only in limited quantities (and in limited edition packaging); it will be more widely available in 2020.

(via luckyscent, additional information via Zoologist Perfumes at Facebook)